A serious need, a dash of ingenuity, and a sprinkle of creativity can produce some seriously cool things. Forget about the iPhone and virtual reality and indoor plumbing, we’re more concerned with how to get baked when the need arises.

Indeed, jonesing for some weed can be a powerful motivator. Don’t believe us? Check out 15 of the best homemade bongs (in no particular order).

MacGyver’s got nothing on these inspired stoners! They took what they had on hand and made something great, something wonderful even. And for that, we tip our rasta caps in their general direction.

Their names may be lost to the haze of time, but these original ganja-preneurs will always hold a special place in our hearts. To paraphrase a classic AC/DC diddy, “For those about to toke, we salute you.”

1) Fruit Has Never Been More Fun 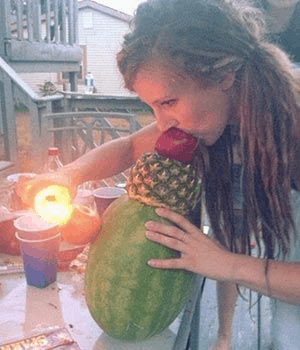 In a pinch, all you really need is an apple to make a pretty useful bong. Of course, you’re going to have to hollow out the fruit first to provide a path for the smoke to travel.

But once you conquer this engineering hurdle, you’ve got a fun and festive (not to mention disposable) bong that can be the life of the party. Add some other fruits like pineapple and watermelon and you’ve got a truly unique bong that everyone will appreciate. 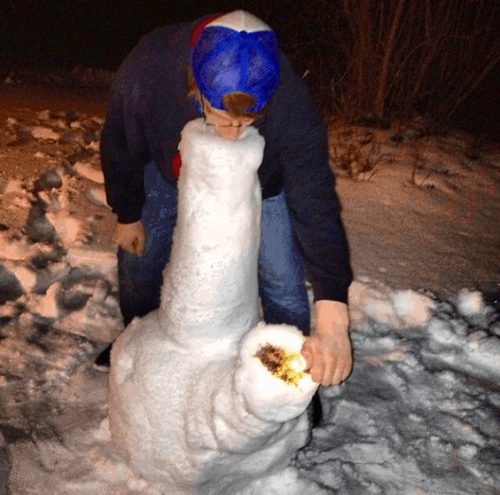 Even trapped in the wilderness on a snowy night with nothing but the clothes on their backs, a bag of ganja, a lighter, and a camera (how else would they take the picture?), these intrepid potheads found a way to get baked. The cleverness of this bong is twofold:

I doubt the sculptors were thinking about that when they put this thing together—they just wanted to get high—but the use of natural material and finding a way to make it work is truly inspired. If you’re wondering how they hollowed it out, just watch this short video. 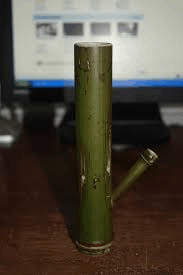 There’s nothing better than making due with what you’ve got on hand. And if you’re fortunate enough to live in a place where bamboo grows wild, you’ve literally got thousands of bongs just waiting to be harvested.

All you need is a saw, a drill (hell, you could probably do it all with a pocket knife in a pinch), a bowl, and a stem and you’ve got yourself a truly righteous, 100-percent natural bong that gets the job done and looks good doing it (just like me).

Check out this video for more information and instructions for making a bamboo bong. 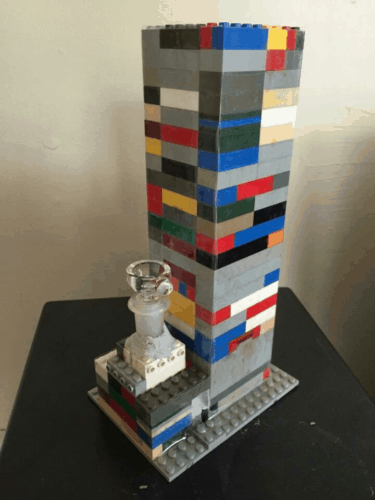 Plastic building blocks (we can’t use the trade name of these bricks but you’ll recognize them from the picture) can be used to make pretty much anything. It was inevitable, then, that some cannabis enthusiast would come up with a way to combine weed and everyone’s favorite toy into a really cool bong.

What’s that saying about give a monkey enough time and it will type Shakespeare? I think this applies.

Seriously though, some of the features the builder thought to include are pretty interesting: windows on the back so you can see inside and a hole toward the bottom of the stack that acts as a carburetor. Brilliant! 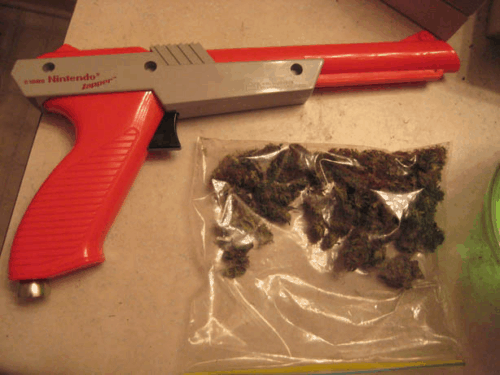 Those of us of a certain age remember this video game blaster (and the giggling dog that went with it) with a fondness and nostalgia that exceeds most other things. So learning that we can make a bong from this video game controller, makes our lives complete.

It’s really quite simple and all the instructions can be found here. Now you can relive your childhood memories and make some new ones all at the same time. Now you’ll be doing the giggling instead of that annoying dog. That’s pretty nifty, don’t ya think?

Like MacGyver of yore who could make a bomb out of some tin foil and a stick of gum, this motivated smoker made a unique bong out of a breath-mint container and what looks to be a piece of coaxial cable (it’s not).

What’s cool about this tiny bong is that it can be disassembled, packed, and carried wherever without raising any eyebrows. It just looks like a random assortment of odd objects, not the pieces of a brilliant marijuana delivery system.

As with all plastics and some metals, remember that when they burn, they can give off some harmful vapors. Make sure that the plastic doesn’t melt and the metal isn’t toxic when heated. 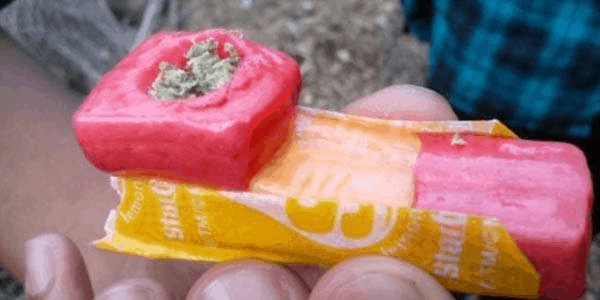 Though it’s more pipe than bong, we had to include this candy bong for sheer inventiveness. Just poke the appropriate holes in a number of chewy candies, load the bowl, and light away. As you’d probably expect, the smoke from this little doodad is a burst of fruit flavors and can make for a memorable toking experience.

And if you want to go all in on the cannabis experience, why not build your bong out of weed candy? It probably won’t affect the experience too much, but just the idea of smoking bud from a bong made of our two favorite things — cannabis and candy — is enough to make us giddy with anticipation.

Just be aware that repeated heat applied to these gummy squares is eventually going to result in one crazy mess. So smoke fast and dispose of properly so it doesn’t get caught in the carpet or someone’s hair.

Peanut butter might help with gum (and be great for the munchies), but something as sticky as these candies is going to take something much stronger than peanuts and oil. 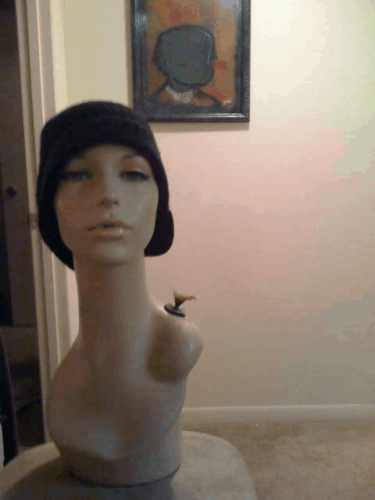 For uniqueness, this bong takes the prize. It’s so cool it could be a piece of art. The mouthpiece is (you guessed it) the mannequin’s mouth so it looks like you’re making out when you’re actually inhaling the smoke.

Seems to us that this would be ideal for teenage boy who likes to smoke weed and practice kissing at the same time. You don’t need a mirror anymore, big guy.

There aren’t any instructions for this particular model so you’ll have to figure it out yourself. But honestly, coming up with new and innovative ways to get the smoke from bowl to lungs is half the fun of the MJ experience.

Some may wonder about the plastics giving off harmful vapors but the builder assures us that the smoke has cooled by the time it hits plastic parts. 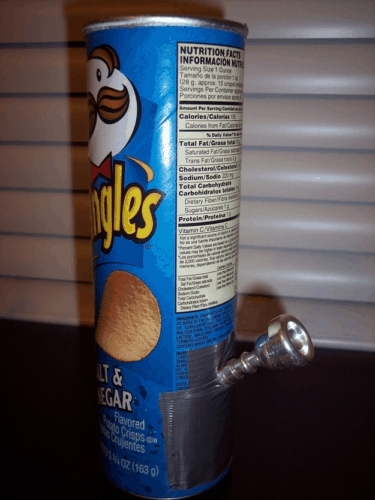 Relax. No birds were harmed in the making of this bong. The subheading was actually referring to the old saying, “We can kill two birds with one stone” (again, no feathered friends were injured) where one bird is the munchies and the other bird is smoking weed.

We know: when you have to explain the joke, it loses some of its caché. Let’s get back to the bong.

Just polish of a can of these tasty potato crisps, punch a hole in the side of the canister, and you’re ready to rock. We’ve never tried this particular model of bong so we can’t attest to the flavor it creates, but we imagine that pretty much everything would be improved by the addition of a little salt and vinegar flavoring. 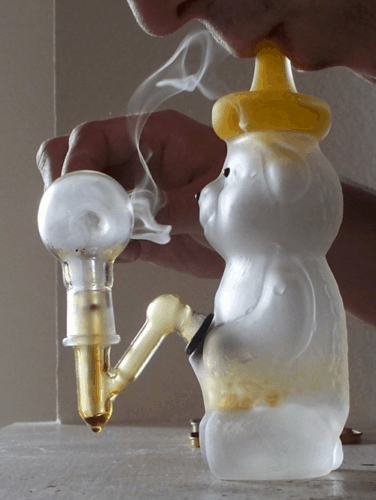 No list would be complete without some form of the homemade honey bear bong. Astute movie watchers will remember Brad Pitt’s character Floyd taking hits from a similar contraption in the 1993 movie True Romance.

The honey bear makes for a quick and easy fix when you’re bongless and need to smoke a bit of ganja to make the day go well.  The small opening at the top (or even the pour spout) makes for easy inhalation and the plastic body is easy to puncture for whatever size stem you have. Plus, the residual honey flavor inside makes a nice addition to even the most potent strain of weed.

Getting high goes to new heights when you smoke your marijuana through an aviator’s flight mask. Add in the helmet and you’re in for one heck of a good time. Plus, when you’re so high you fall off the world, you won’t hurt your head when you come back down.

Just cut the end off the hose and insert some brass piping and a bowl to make a place to light your luigi. While this particular bong looks badass in a very Top Gun-ish way, users attest to the fact that, “It really accomplishes nothing except making your eyes extra red from irritation and doubling how much you reek of weed. You don’t get extra high from it, and it’s not too good for you to keep re-breathing your exhaled smoke.”

Check this one off your bucket list and then go back to something a little less dramatic. 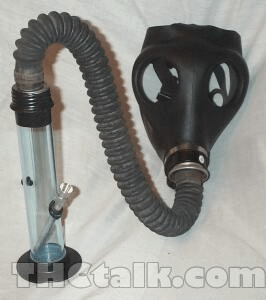 This one makes for a great party experience and, like the flight mask bong above, is certainly worth doing at least once just to say you have. Few people have a gas mask lying around so building this bong may take a fair amount of searching and a bit of work.

That said, the effort would certainly be worth it just for the pictures you could take. You probably wouldn’t want to make this your regular rig, but breaking it out now and again to impress your friends is well worth the space it takes to store.

This homemade bong is pretty creative in a novelty sort of way and would certainly get the job done if no other option were available. You’d need to seal the holes with superglue so the smoke and water don’t leak out, but after that, the potato shape makes for a nice container.

If you’re absconding with the potato head from a child’s toy box, just make sure you replace it with something equally as cool or Karma will surely come back around and slap you in the face.

Yeah, it’s an obvious pun, but the use of this “found” object makes it a fine addition to our list of homemade bongs. We haven’t seen one of these in action, but it seems like it would make even the slowest evening something to remember.

The shape of the super smoker is even somewhat bong shaped, so you don’t have to do a lot of modification to get it to work. Just pack a bowl, light up, and soak on. 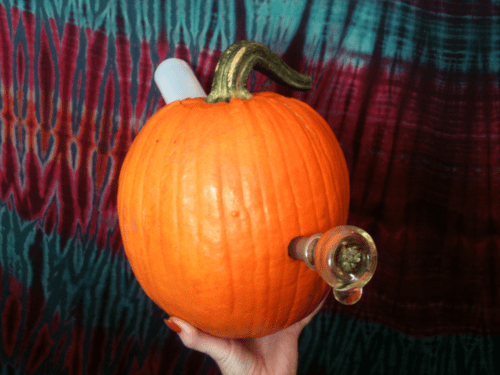 As you’ve seen from this list, really any closed container with two holes can be used as a bong in a pinch. That’s the general idea behind the pumpkin bong. It’s just a chamber with a mouthpiece and a bowl on either side.

One thing that makes the pumpkin preferable over other fruits and vegetables is that its insides are relatively loosely packed. There’s not a ton of work involved in removing the seeds, and all you’ll really need is a knife and a big spoon.

Interested in making your own pumpkin bong? Here’s a super simple way to make this ganja gourd.

Autumn will never be the same again.

Make Your Own Homemade Bong

There’s nothing quite like pulling a beer bottle from the garbage (your own garbage, please), drilling a hole in the side, inserting your stem and bowl, and hitting for the fences. It’s profoundly liberating and hearkens back to the days when you built forts out of blankets and pillows.

So exercise your inner child! Get crazy and make a homemade bong out of whatever you have around you. Maybe next time, yours will be on this list too.

For more information on all things cannabis and to check out our 100-percent all-natural marijuana products, visit Honest Marijuana.com today.