Glazed reddening-eyes, rasta hat, and a spliff bursting with green leaves used to be the pop culture image of marijuana users. But as our collective culture embraces our new images of cannabis users, many methods of consumption and production are evolving and some finding a revival. This article will introduce you to the various forms of cannabis concentrates that you’re likely to encounter.

When you hear the word “concentrate” most people may think “focus”, or perhaps the fruit juice they drank as a child. But times are changing. It’s now a popular form of consuming cannabis. Keeping this in mind, let’s take a look at the some old favorites and explore some new exciting ways to consume marijuana through cannabis concentrates. 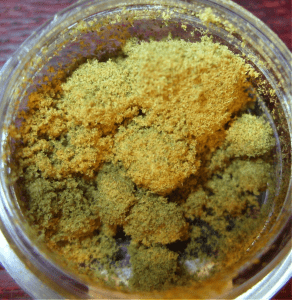 The simplest way to concentrate your favorite bud, Kief is the powdery substance that remains after you break up cannabis. Looking closely at any bud you’ll notice that glass-like substance covering the small leafs. Those, my friend, are trichomes, the part of marijuana that contains the most THC – the active ingredient that causes those ‘high’ feelings.

Although all parts of the cannabis plant contains some traces of THC, trichomes produce resins that contain THC, as well as terpenes, the flavour producing compound, and other cannabinoids. The process of retrieving Kief is a simple one and can be done with no special tools or equipment. But to aid in collecting this concentrate, a three chambered grinder is the best way to go.

No doubt the oldest form of concentrate on this list, hash has been used for centuries in the Middle East and Indian sub continent. Traditionally made from the native indica variety of cannabis, today hash comes in many varieties and methods of preparation. Produced from compacting plant material, including those all-important trichomes, hash can take on many colors as the quality and purity of the base material varies widely. Ranging from a crumbly light brown to a slightly sticky dark tar, hash has as many varieties as there are strains of marijuana. This concentrate can be a bit overpowering for the casual recreational user or even the inexperienced medicinal user. 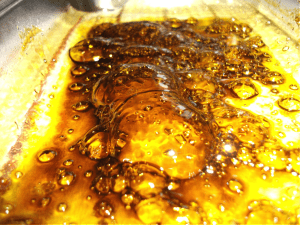 Although this method of producing cannabis concentrates has been around since the 1970’s, Butane Hash Oil, also known as BHO, has seen a revival in recent years.

This concentrate is a lot more complicated than just collecting cannabis material and squishing it into a usable form. For the budding scientist (see what I did there?!) the process of making BHO can range from fairly easy to  very dangerous. Butane is the flammable gas you find in lighters and can be used as a solvent in extraction of the cannabinoids, including THC, from the plant material. The resulting product has a very high THC content typically above 90%, which, when compared to dried marijuana bud coming in at under 30%, seems like a first class ticket on Snoop Dogg’s G6.

Despite recent news reports espousing the dangers of producing BHO by amateurs, regulated professional dispensaries have picked up the pieces to provide commercial quality ‘honey oil’ to markets. At Honest Marijuana, we provide BHO to a professional standard.

Although some critics have denounced BHO due to the possibility of inhaling byproducts, the spent lighters that litter the underside of your couch which contain butane may remind you of what you inhale. It’s said to be called the “crack of marijuana”, but when the concentrate is clean, it’s not hazardous as all, yet very intense.

Have you ever wondered what the most innovative, complex, and expensive way to use marijuana is? Well wonder no more, as the process to make CO2 oil seems to be just that. Looking like a machine certified by NASA (not really!), CO2 oil uses a complex set of tubes and and highly pressurized carbon dioxide as a supercritical fluid, which already sounds like a stoned out sci-fi -junkie did the naming. The result is mixed with polypropylene glycol, an ingredient found in paintballs. So you are at best smoking the future and at worst spending a bazillion dollars. We’re not sure if this will be around for the long term, but it’s fun to learn about either way.

Not surprisingly, this method of cannabis use is unpopular to say the least. For many marijuana users there is an aspect of community and social-bond building when you pass around a giant vaporizer balloon or a precisely rolled joint. You share the experience with others, and it’s a social thing to do. But it would be hard to enjoy yourself along with  some friends while passing around an eyedropper. However, let’s sidestep the stigma and look at the benefits of this under-utilized cannabis concentrate.

Tinctures are liquid concentrations made from a process that removes cannabinoids and THC from plant material by using alcohol as a solvent. A small amount of the liquid is placed under the tongue, usually 3 to 5 drops, and the effects from the concentrate come on rather quickly.

Remember that time you ate those ‘special’ brownies and wondered when you were going to feel it? Tinctures actual work much faster than their edible counterparts, typically bringing full effect within 20 minutes. This also varies widely depending on the quality of the marijuana used to make the tincture.

For some the added bonus is the discrete form of tinctures. They really don’t smell (unless you dump out the entire bottle at once) and the convenience of being able to dose whenever and wherever without curious parties wondering where that puff of smoke or skunk smell is coming from is a great benefit to regular users.

Maybe this interesting method of cannabis use isn’t for everyone, but a bottle from a dispensary will usually cost no more than $30. Alternatively, you can always try to produce your own tinctures at home. We’ll save that step-by-step guide for another post. 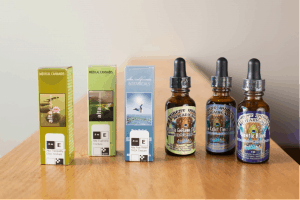 Although the name could have used a PR campaign, RSO, also known as Phoenix tears, helped this product’s namesake beat skin cancer at home. Using some innovation and know-how, Mr. Simpson created his homemade remedy from soaking cannabis or hemp in isopropyl alcohol. This process strips the plant material of its compounds, resulting in a liquid resembling tar. RSO can be eaten or applied directly to skin.

Don’t fret, as you won’t have to get ahold of Mr. Simpson to get this product. Many dispensaries now sell their own versions of RSO some of which do not contain any psychoactive chemicals.

Topicals are absorbed through the skin and interact with CB2 receptors that are found in your epidermis (skin, for those of you who aren’t as weird as me) and are common in other parts of your body. The results can be effective for inflammation, swelling, allergic skin reactions, or muscle strain.

Many people choose topicals because of the lack of psychoactive qualities that are closely associated with other forms of cannabis dosing. Many new and interesting changes are happening in this little known avenue of the marijuana market. Long-lasting patches and other lubricants are quickly arriving in dispensaries for consumer use.

So, there you have it, from the simple kief to the complicated CO2 oil, the modern cannabis user is spoiled with options when it comes to the variety of cannabis concentrates out there. If you’re feeling fresh for a change to the usual bong or joint to get your medicinal or recreational needs, try some of the above mentioned products. As always, please enjoy safely and responsibly.