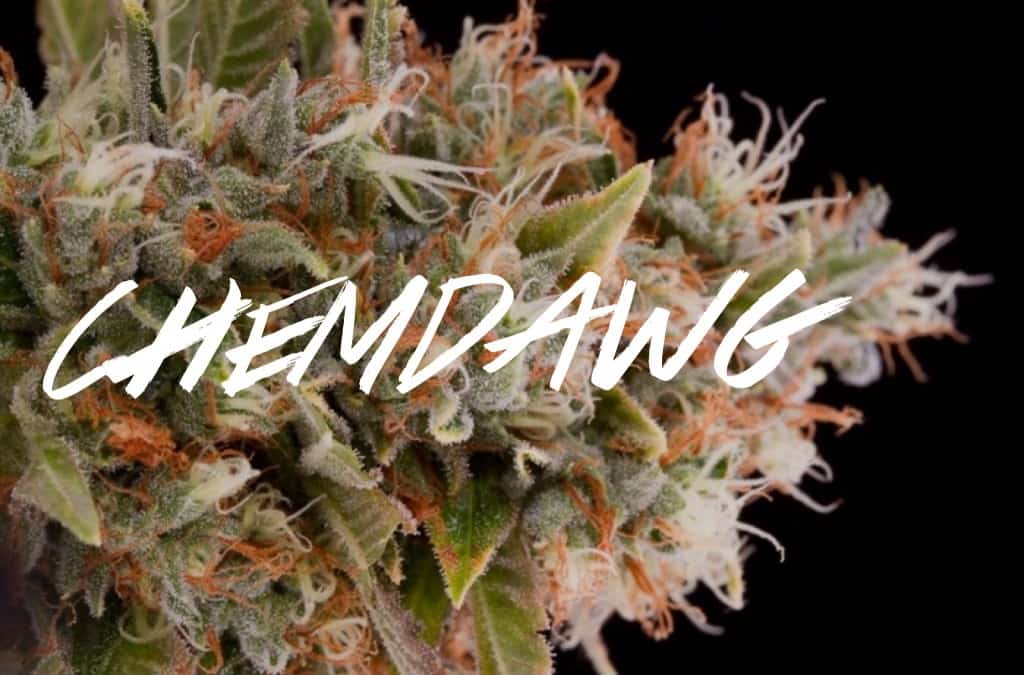 Chemdawg is a hybrid strain that brings you a slight indica body buzz along with an intense cerebral sativa high. The strain is easily recognizable with its round buds, wide indica shapes, highlighted with dark lime indica shades and lots of light lemon, fiery reddish, orange and tan sativa hairs all glued together with large, gleaming, quartz-like trichomes. 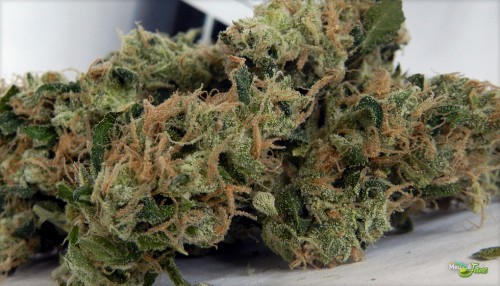 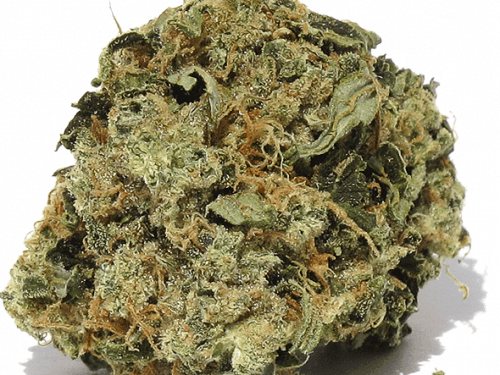 Chemdawg typically has very high THC levels between 15% and 20%. One strain of Chemdawg topped out close to 25% at a Denver Medical Cannabis Cup in April 2011. The strain is also loaded with caryophyllene and myrcene terpenes which makes the strain great for treating chronic anxiety, depression, PTSD and migraines as well as nausea, bowel movement disorders and muscle and joint stress. 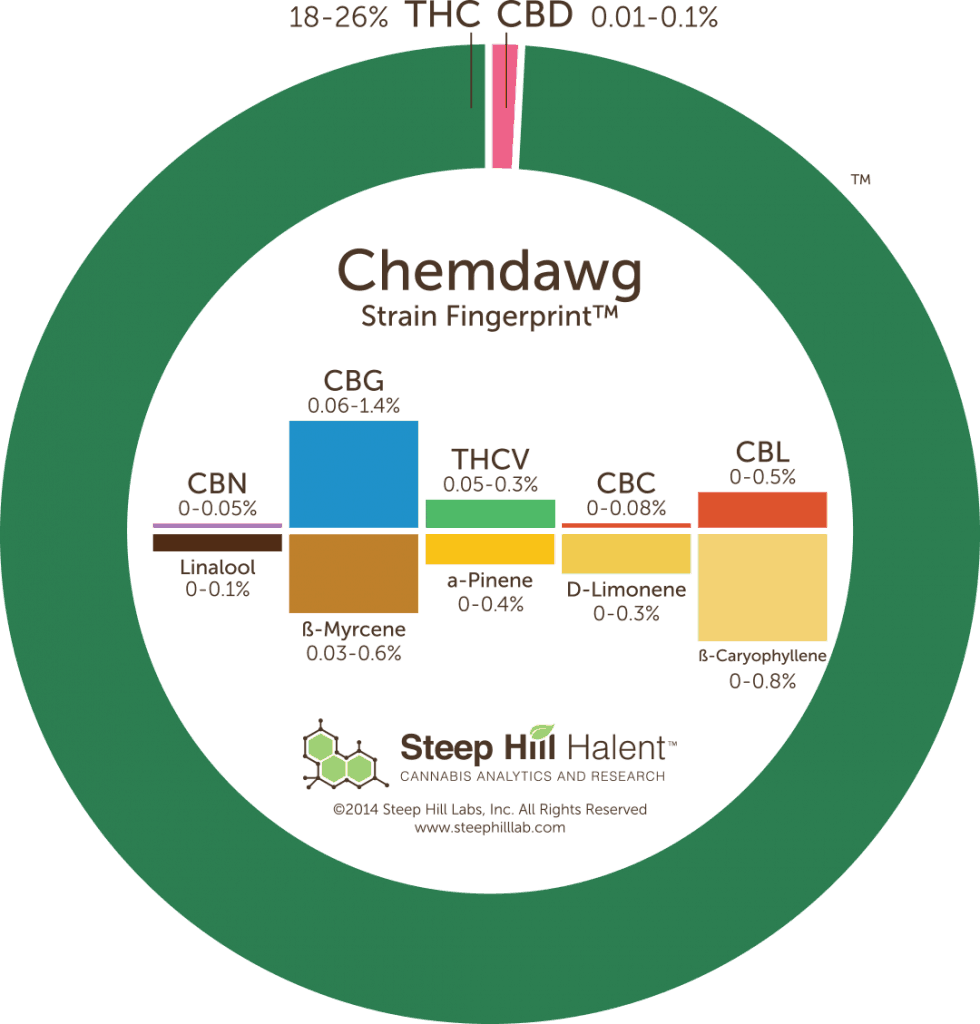 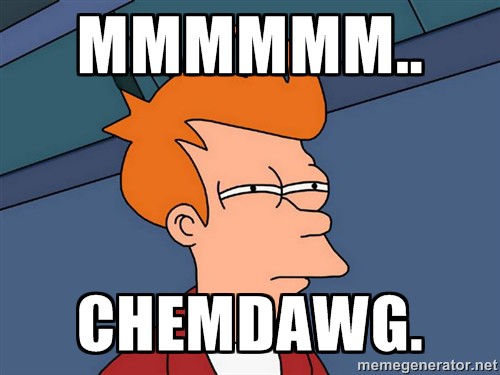 No one knows for certain where the strain originally came from, but everyone understands why has its unique name as soon as its unmistakable, pungent, gasoline-like, diesel aroma hits your nose preparing your endocannabinoid system for one of the strongest highs on the planet! Don’t let the odor intimidate you! The strain has a sweet, smooth lemon taste. If you love really strong cerebral highs that can space you out for hours worth of relaxed fun, or if you require effective relief from acute physical or psychological pain, then consider this strain your faithful new companion! 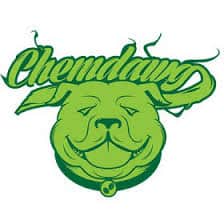 The Legend of Chemdawg 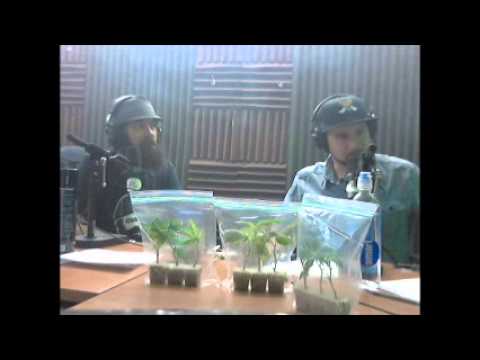 It is rumored that Chemdawg was created from a cross of Kush, Hash Plant and Northern Lights, however the exact origins of the strain are shrouded in obscurity and controversy. The birth of Chemdawg begins with a grower named Joe Brand, also known as Wonkanobe, and his friend Pbud from Colorado. They went on tour with the Grateful Dead with a pound of pot that they called Dog Bud because “it was so strong that it made you roll over like a dog” after smoking it according to Pbud. Dog Bud is rumored to have been grown from a three-way cross of Thai, Hashplant and Skunk by smuggler and breeder Frank Gegax in a huge underground pot bunker which was busted in 1990. They also jokingly called it Chemweed due to its fuel/chemical like smell.

One of Wonkanobe and Pbud’s customers from a show fell in love with the Chemweed and instantly returned for more of it. He became friends with Wonkanobe and Pbud and eventually combined the names “Dog Bud” and Chemweed” into “Chemdawg” which also wound up becoming the nickname of their new friend Chemdog, the grower as opposed to the strain. The growers stayed in touch after the Grateful Dead tour ended and Wonkanobe and Pbud sent Chemdog two more ounces of the original “Dog Bud”. One of these ounces contained thirteen seeds responsible for starting the Chemdawg dynasty. Chemdog sprouted the first four seeds in 1991. One of the seeds turned out to be a male which he could have used to grow more amazing cannabis cup winning ganja and which he still regrets having thrown out. He named the other three plants Chemdawg ‘91, Chemdawg a and Chemdawg b. Chemdog and his girlfriend germinated one of the original thirteen seeds in 2001. Chemdog reunited with Wonkanobe and gave him back four of the six remaining seeds, the fourth of which turned out closest to the original “Dog Bud” strain and was dubbed the reunion pheno. All of the Chemdawg weed in the world originally came from one of those five original plants and Chemdog still has the last two seeds un-sprouted in his stash. 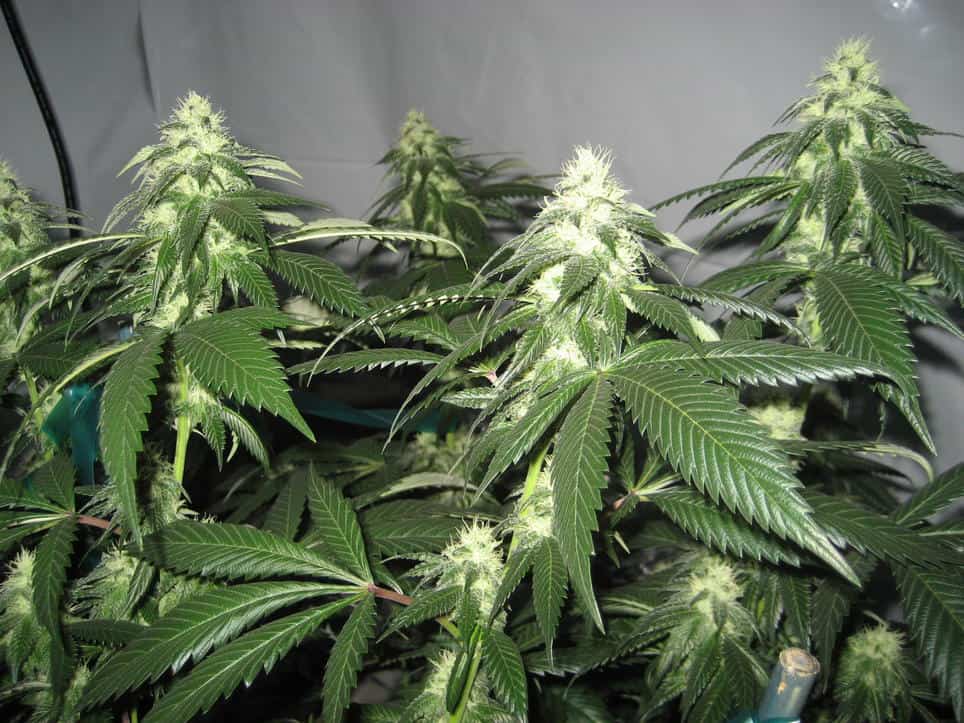 The Legacy of Chemdawg

The strain has also given birth to highly sought after strains such as OG Kush and Sour Diesel. Sour Diesel is typically regarded as a cross between Chemdawg with Northern Lights and Massachusetts Super Skunk however, others including Chemdog himself claim that Chemdawg and Sour Diesel are simply the exact same strain. 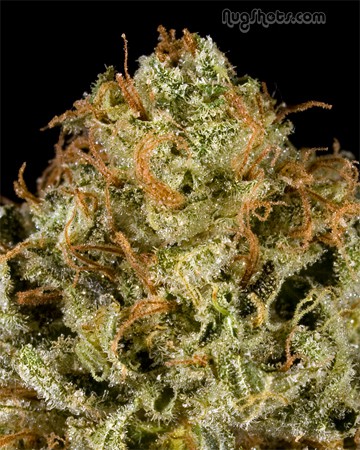 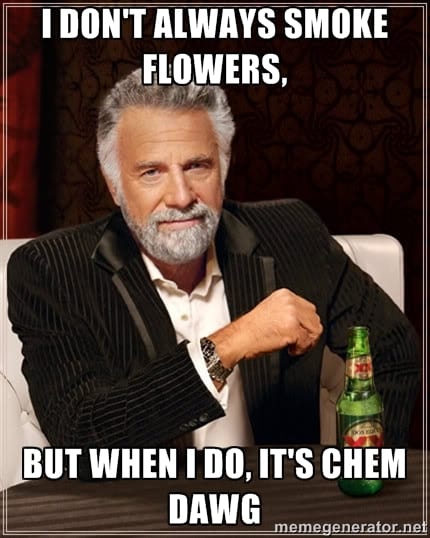 Chemdawg’s “high THC content will have you feeling like the first time you tried weed” according to maxers. Leafly user KakashiHatake said “It is a good day timer, and I found walking around the park to be very pleasant experience.” The strain is “great for meditating in silence and then going for a hike after the medicine wears off and the hunger sets in with this strain” according to MediMarijMa. SugarDropSuperTrucker had been searching for something that would “really help my pain, relax my body and make my mind flow and I finally found it.” “If you need something to help calm you down, this is the one” according to daikaiju710 who also said that the strain was great for pain issues, depression and stress levels.

Senorstrain was pleased with his purchase, “the toxic aroma curled my brow and opened my sinus cavities.” JLKATHERMAN uses the strain “ to fight my migraines.” “After a long day of work this strain relieved all my stress” according to antman71499. Chemdawg is thelalady’s “go-to strain for when I need to be social. Really calms my stomach as well, so it’s a great after-dinner toke.” Tay207 has horrible cramps and GI problems, and “this is the only strain I’ve gotten that has made that pain go away”. “I tore my right rotator cuff a few months back and this strain got me through it. The heavy body high it gives you will loosen your muscles right up!” according to lovesp0nge. 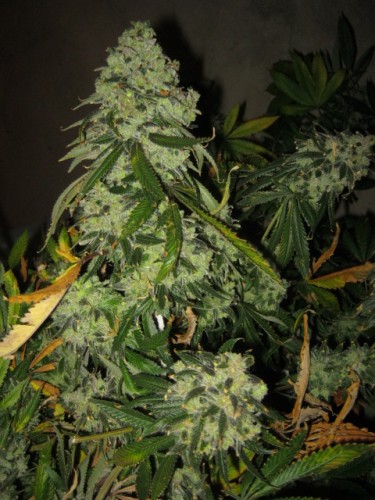 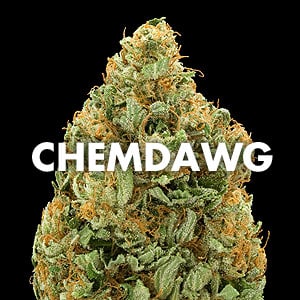 Chemdawg is one of the most popular strains of cannabis due to its unmistakable aroma, taste, cerebral euphoria and of course due it’s undeniable efficacy in warding off a wide range of physical and psychological pain. The mystery of the strains lineage, it’s christening by the Grateful Dead Community and its legacy of popular, potent highly sought after strains only adds to the allure of this classic strain of cannabis. 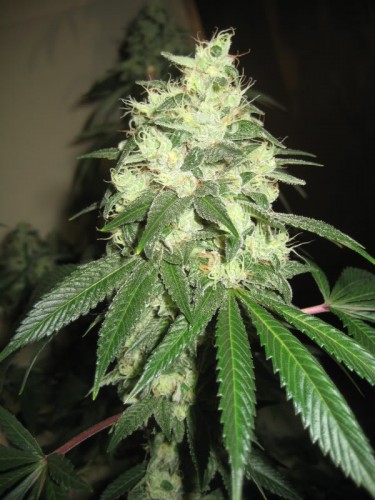