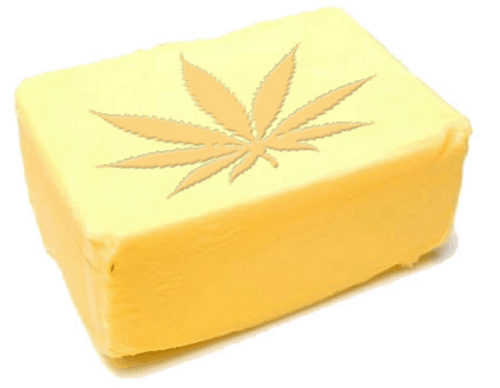 Marijuana edibles have been around for a very long time. In fact, ingesting the plant (rather than smoking it) is probably how it was discovered in the first place. The glorious “discovery” of cannabis’ textile, health, and psychoactive benefits occurred some 5,000 years ago by Chinese sage emperor Shennong. It is rumored that both a servant, and Emperor Shennong himself, failed to notice a leaf fall into the emperor’s boiling tea water. The emperor drank the tea, became obsessed with the cannabis plant, and began studying its uses. He eventually recorded his findings—which included cures for gout, rheumatism, malaria, and absentmindedness—in the Pen Ts’ao Ching pharmacopeia. From there, the use of cannabis spread to India, the Caribbean, and around the world to a grow operation near you.

But just because Emperor Shennong felt the effects just by steeping a leaf in boiling water, doesn’t mean you can do the same thing with all your edibles. You don’t just dump Sour Diesel nugs into the cookie dough. That won’t work. It takes a bit of work first. Trust us, though, it’s worth it. One of the best ways to cook with cannabis is by mixing up your own batch of cannabis butter (cannabutter or weed butter for short).

Cannabis butter is just what the name indicates: butter that contains THC and other marijuana properties. And because it’s basically butter, it can be used instead of regular butter in all your favorite recipes. Here’s how to make your own weed butter.

Cooking with cannabis isn’t as simple as measuring out a tablespoon of your favorite strain into the cookies, marinara sauce, brownies, or waffles. “Why?” you ask? Good question.

First, raw weed is not psychoactive. Your body can’t process the raw marijuana plant matter in a way that would get the cannabinoids into your bloodstream. At best, your body would just digest the plant matter like it would any other leafy green. At worst, your body may reject the raw plant matter leading to vomiting, diarrhea, and other stomach problems.

Second, raw weed tastes bad. That flavor can seriously affect the taste of anything you put it in. You don’t want your delicious chocolate chip cookie recipe to be ruined by the bitter, foul-tasting stuff that was supposed to have you dancing on the ceiling.

Even the dried bud you buy at your local dispensary isn’t immediately ready for consumption. That’s because drying only transforms a small amount of THCA and CBDA into the more usable (and fun) THC and CBD. To get the most out of your cannabis, you need to decarboxylate your weed first. Here’s the skinny on what exactly decarboxylation is.

The Importance Of Decarboxylating Your Cannabis

The word “decarboxylation” is a combination of language pieces that, when we break them down and understand them, gives us some insight into what the process entail. Let’s start at the beginning.

Put that all together and what do you get? The action of removing the carboxyl group. Raw, and even dried cannabis material, contains tetrahydrocannabinolic acid (THCA) and cannabinolic acid (CBDA) in various quantities. As you can see from the picture below, it’s that extra CO2 that means the difference between the THCA and the THC. You’ll also notice the middle portion of the picture. That tells you how you go about transforming what is basically an unusable molecule (THCA) into something you just can’t get enough of (THC).

So you’ve got your raw weed and you’re trying to decide what to do with it: smoke it or bake it in a pie? If you choose to smoke it, you’re decarboxylating your cannabis when you light it on fire. But you can’t use the same process—lighting it on fire—if you want to use your cannabis in edibles. Because once you burn it with fire, it’s gone for good.

To use your cannabis in edibles, you need to decarboxylate it at a lower temperature for a longer time. What temperature and for how long? We’ll give you those numbers in steps one and two of the butter-making process below.

Before that, though, it’s important to understand why you should decarboxylate your weed at low temperatures for longer periods of time. We can sum it up in one word: terpenes.

So what do terpenes have to do with the decarboxylation process? Everything. Terpenes begin to break down at temperatures above 310 degrees Fahrenheit. You still get some of the terpenes when you smoke your weed because the trip from the burning end of the joint or bong to your lungs is pretty quick. But we can’t say the same thing about decarboxylating weed for edibles. The process requires lower temperatures to preserve the terpenes (below 310 degrees Fahrenheit), and therefore a longer application of heat. So we can’t just set our oven at 400 degrees Fahrenheit and bake the bud for ten minutes. No, we need much lower temperatures and much longer bake times.

How To Incorporate Cannabis Into Your Favorite Recipes

There are many different ways to consume cannabis as an edible. You can brew it into a tincture and add it to juices and other drinks. You can sprinkle some decarboxylated cannabis on your salad (instead of bitter greens). But perhaps the easiest and most flexible way to sneak your cannabis into pretty much any recipe is to create a cannabis-infused butter. That’s because pretty much all baking uses butter at some point. Butter can be used to saute. Butter can be used to grease a pan when cooking eggs. You can even spread cannabis butter directly on your toast, rolls, or biscuits for a tasty THC treat.

How To Make Cannabis Butter 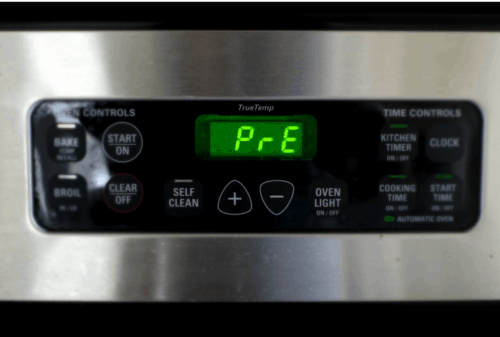 Preheat your oven to 240 degrees Fahrenheit. While the oven is heating up, spread your plant material in a single layer on the baking sheet. One with sides works best so you don’t lose any of your precious ganja. But in a pinch, one without sides works as well. You’ll just have to be a bit more careful.

Bake the cannabis on the baking sheet for 40 minutes. Be sure to turn the sheet a couple of times so that all the cannabis gets cooked.

This is the decarboxylation process we talked about above. Remember that decarboxylation activates the THC and the CBD making it more easily digestible in the stomach. You may still see some benefits if you don’t decarboxylate (or decarb) your bud, but it’s essential if you really want to reap the rewards, and experience the highs, of putting your marijuana in food.

After you’ve baked your marijuana for 40 minutes, it should be dry and crumbly and ready to be mixed into the butter. 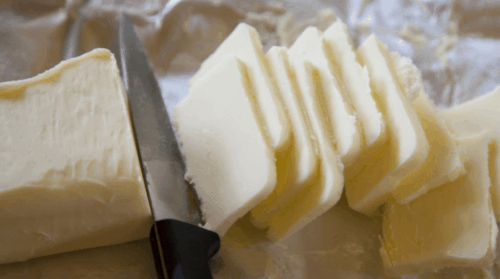 Add 4 cups of water to a medium saucepan. Bring it to a boil on the stove. Place your butter in the boiling water and stir the mix until it’s completely melted. It won’t take long. 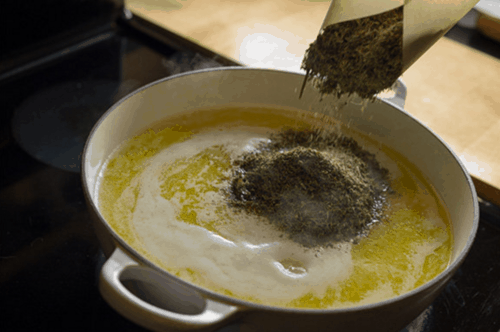 Add your plant matter to the boiling water/butter mix and reduce the heat so you don’t burn the weed. Turn down the stove so that the mix is barely simmering. This should be very low heat.

Let the butter/water/weed mix simmer for three hours. You’ve obviously got some time to kill so complete Step 6 and then come back here.

The three-hours worth of simmering serves to get rid of some of the water. Towards the end of the three hours, watch the top of the mixture. It will turn from watery to thick and shiny. That’s how you know it’s done. Remove the pan from the heat.

While the butter/water/weed mix is cooking, prepare your large mixing bowl. You’re going to pour the hot liquid into the bowl so make sure it can handle the heat. A Pyrex, plastic, or metal mixing bowl works well. Just make sure it’s big enough to handle the amount of mixture simmering in the pan. 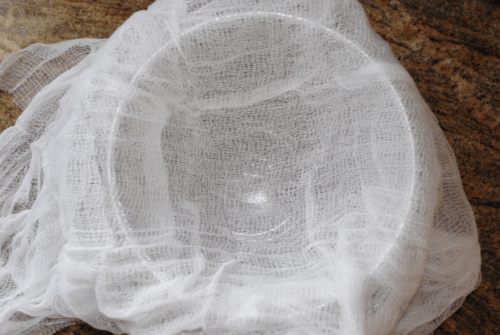 Secure two layers of cheesecloth over the top of the mixing bowl with the rubber band, string, or tape. We like string because it doesn’t give and really holds the cheesecloth in place. You’re going to be pouring a rather heavy mixture onto the cheesecloth so make sure you have enough that it won’t pull out from under the string.

In addition, secure the string on the smaller diameter of the bowl (towards the bottom where the bowl curves). This is important so the string doesn’t just slide right up and over the lip of the bowl when you are straining the mixture.

When the pot is completely empty, pick up the cheesecloth by the four corners and make a small bag out of it. You can even twist the top to keep everything inside.

Now squeeze the cheesecloth and the goo inside to remove every ounce of that precious butter. 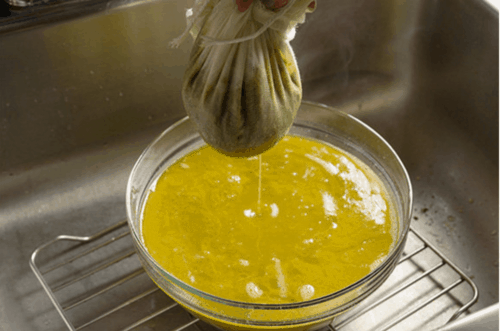 Now it’s time to wait again. Just one more hour and we’re through. I promise.

Place the mixing bowl in the refrigerator and allow the weed butter to cool.  During this hour, the butter will separate itself from any of the remaining water in the mix. You’ll know it’s done when the top layer is solid. 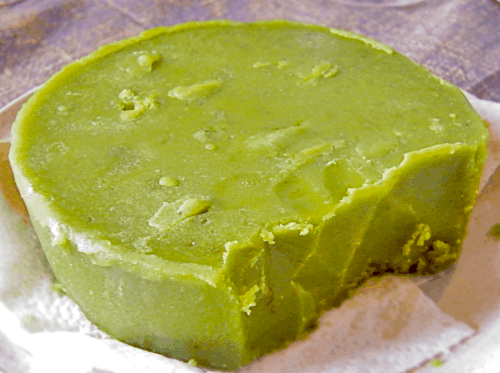 That’s it. You’re done. The only optional step left is to carve the weed butter into smaller pieces for easy storage.

There are lots of great recipes out there for cooking with weed butter. If you’ve never consumed cannabis through food before, be warned. The effects of eating marijuana can differ drastically from smoking it.

For one thing, the effects can take anywhere from 30 to 190 minutes to kick in. Yes, you read that right. It can take up to 3 hours for you to get high off that special brownie you just ate. This is because of the way food is digested in your stomach. There is one upside to this delay: you won’t need near as much weed to achieve a good high as you would with a joint or a bong. When you roll a typical joint, you use about 0.5 grams (or 500 milligrams for those who like larger number). A good starting point for ingesting cannabis is 0.001 grams (or 1 milligram). That’s just how potent cannabis is when eaten. So try not to get impatient and eat more. You’ll only set yourself up for a bad ride.

For another thing, the experience of eating marijuana-laced food has a tendency to be a lot more intense because the THC is digested directly into the bloodstream instead of being filtered (to some degree) in the lungs. In addition, the high can last a lot longer.

Finally, too much THC can result in paranoia, anxiety, nausea, hangover, and a general bad feeling. For these reasons, it’s always a good idea to start small and slow when experimenting with marijuana edibles. Try not to get too high too fast or the experience may turn you off of edibles for good. And that would be a shame.

If you do get too high too fast, try the following techniques to help bring you down.

Because consuming cannabis is a great alternative for those who don’t want to smoke it but still want the pain-killing, high-flying effects. If you want to try consuming marijuana in food before you set about making your own, visit your local dispensary and see if they recommend a product to get you started on the road to edibles.

Have a great experience with weed butter or edibles in general? Tell us about it in the comments section.