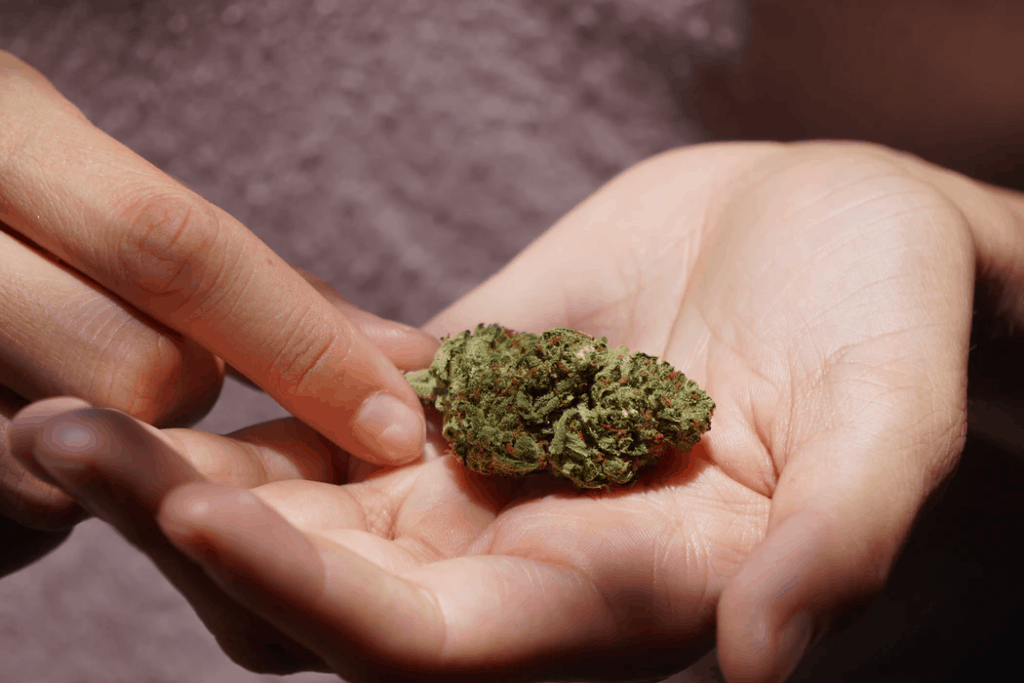 Ever wonder what gives your favorite cannabis strain its woodsy, spicy smell and taste? Chances are, it’s humulene.

Never heard of it? That’s no big surprise.

Humulene is a chemical component of cannabis that often gets lost in the glow of its cannabinoid cousins THC and CBD.

And even if you have heard of this chemical compound, it may have been pronounced so incorrectly that you don’t connect it to the topic of this article.

But don’t let humulene’s lack of stardom and difficult pronunciation fool you — it’s an important part of the cannabis experience.

In this article, the all-things-cannabis experts at Honest Marijuana tell you everything you need to know about this tasty terpene. 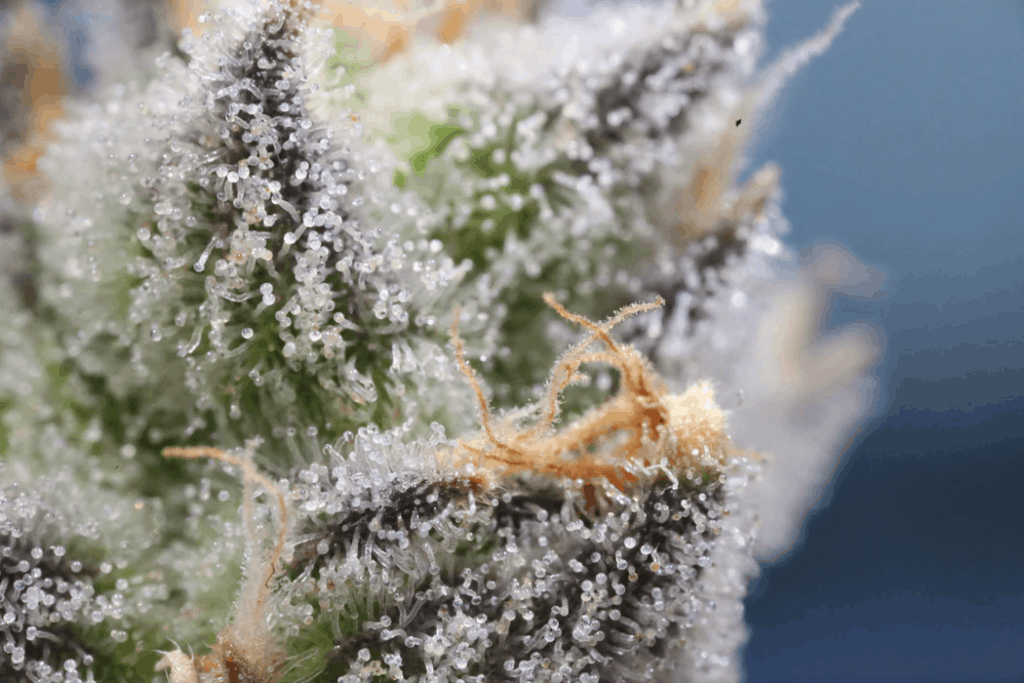 Humulene — or α-humulene (alpha humulene), to be more precise — is a terpene that makes up almost 40% of the terpene profile in modern marijuana strains.

Along with caryophyllene and myrcene, humulene is one of the most common terpenes in the cannabis plant.

As we mentioned at the beginning of this article, humulene is responsible for producing many of the woody and spicy (and sometimes earthy) flavors and smells you’ve come to enjoy in your ganja.

If you’re trying to imagine what humulene smells and tastes like, think hops, sage, or clove — all of which express high percentages of humulene in combination with other terpenes.

Other common plants that contain high amounts of humulene include:

So, if you’ve ever run across any of those things, you’ve got a pretty good idea what humulene tastes and smells like.

A Bit About Pronunciation 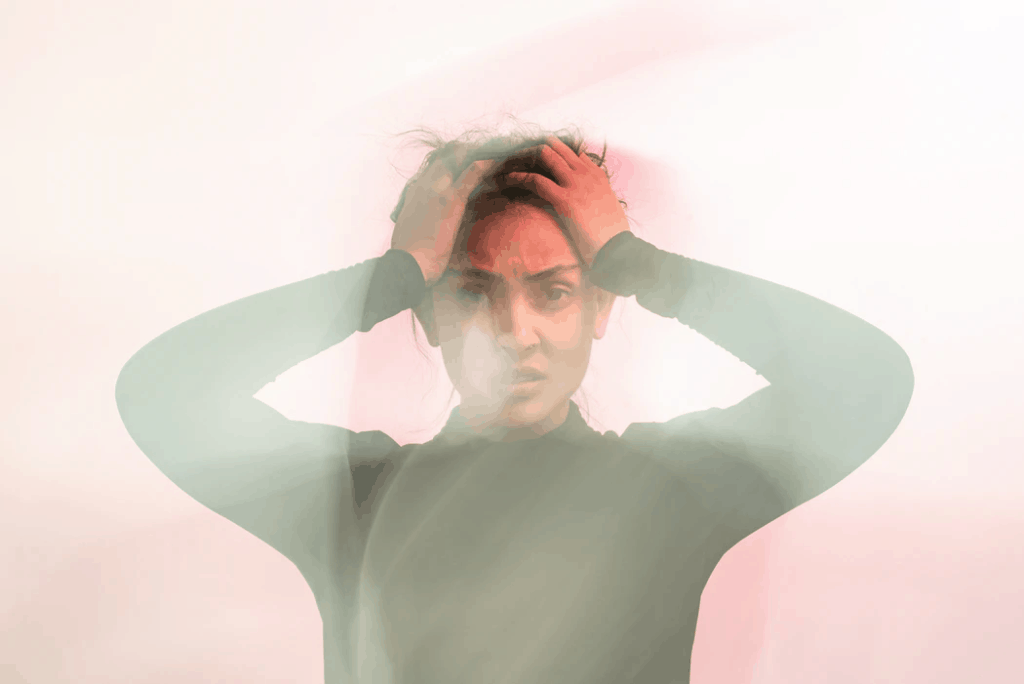 While we’re discussing the basics of humulene, let’s touch on pronunciation so we’re all saying it correctly.

Put it all together, and you get: hum-u-lene. Humulene!

It’s also worth noting that the first syllable gets the major emphasis. So you’d say hum-u-lene, not hum-u-lene nor hum-u-lene.

Say it 10 times fast and, pretty soon, you’ll sound like a pro. Now, on to other things.

Throughout the beginning of this article, we’ve mentioned repeatedly that myrcene is a terpene. But what exactly does that mean?

Read on for the answer. 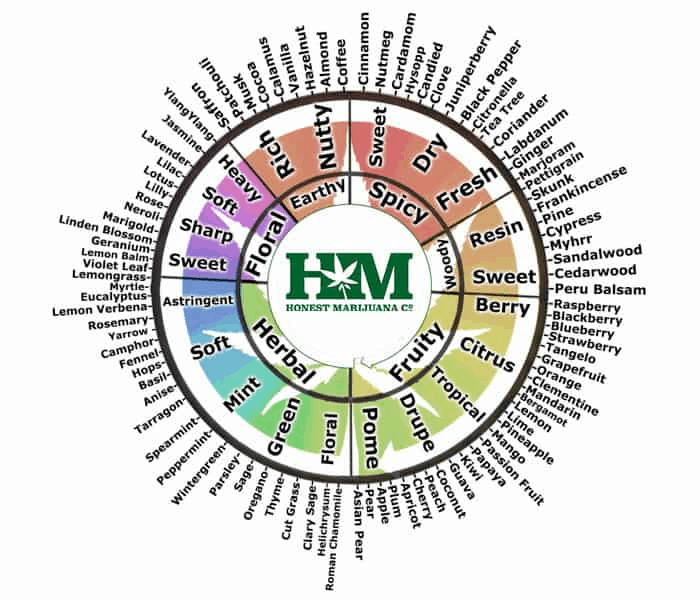 Terpenes are a large class of chemical compounds (often taking the form of oils) that, when detected by your nose and tongue, produce an entire range of smells and flavors.

The general category of terpenes can be subdivided into monoterpenes and sesquiterpenes.

Monoterpenes — such as myrcene, limonene, and others — are light terpenes (think weight) that are responsible for a wide range of floral scents including rose, apple, geranium, kiwi, and jasmine.

Sesquiterpenes — such as humulene — are heavy terpenes (again, think weight) that are responsible for a wide range of pungent scents including diesel fuel, skunk, tea tree, musk, and patchouli.

So, for example, the terpenes that give various fruits their unique flavor can, with the right breeding, be produced in your favorite fruit-flavor cannabis strain (Fruity Pebbles, for example).

But the wow factor doesn’t stop there.

Terpenes — be they of the mono- or sesqui-variety — are not unique to sativa, indica, and ruderalis. In fact, all plants produce terpenes in various combinations and quantities.

That’s why all the flavors and aromas in the image at the start of this section are named after plants. Terpenes are responsible for creating those flavors and smells.

Terpenes also produce a wide range of health benefits and are useful for treating ailments including:

That doesn’t mean you can use humulene to treat all these disorders. Humulene has its own unique benefits.

What Are The Effects Of Humulene? 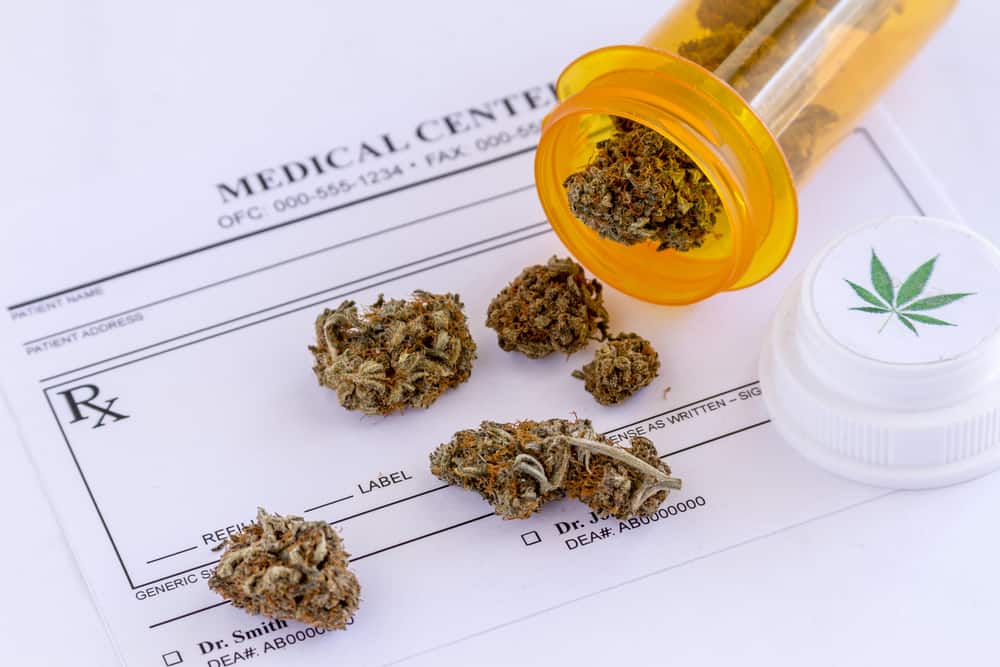 While the cannabinoids THC, CBD, CBG, CBN, THC-O, and others, offer physical and mental benefits, humulene also contributes a number of effects that you can take advantage of.

Studies using humulene to treat everything from osteoarthritis to allergies have shown that the terpene may one day be a major contributor to the treatment and management of chronic inflammatory diseases.

It’s important to note that the studies were conducted with higher levels of humulene than you’re likely to get in any one smoke sesh, but the results were promising for the future of humulene for treating medical conditions.

Humulene is also being used successfully to treat medical conditions caused by viruses, bacteria, and fungi, including:

With further research, scientists and doctors will, no doubt, find more ways that humulene can serve as an anti-viral/anti-fungal/anti-bacterial.

Because humulene has potential as a powerful anti-inflammatory, it may also serve as an anti-tumoral.

The researchers warn not to take these results for more than they’re worth because the tests were only performed on single cells. More research is necessary to determine if humulene has any effect on high-mass, malignant tumors.

Keep in mind that these benefits are for humulene by itself. Combine it with other terpenes and cannabinoids and you’ll experience something you never thought possible — the entourage effect.

Get To Know The Entourage Effect 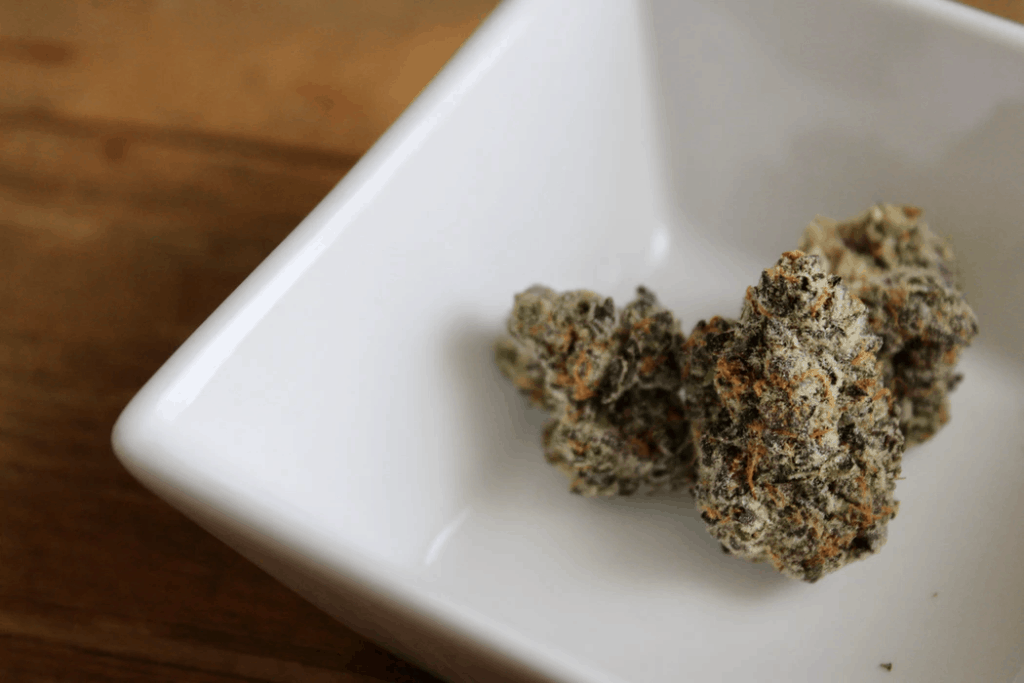 The entourage effect is the interaction of cannabis compounds (e.g., cannabinoids, terpenes, flavonoids, and others) to produce certain physical effects.

The entourage effect is so vital in creating these physical effects that some are impossible without it.

You can’t substitute THC for CBD and expect to find relief from psychotic disorders. The two are not interchangeable in that regard.

And while THC and CBD can be used to treat some of the same things, the specific, unique effects mentioned above can only be gained by using one or the other.

But put them together and suddenly you have a wide variety of new treatments and effects available.

For example, the combination of cannabinoids and terpenes such as humulene makes the treatment of depression, OCD, arthritis, and migraines possible.

The cannabinoids and terpenes by themselves don’t result in these same effects. It’s their combination that produces what’s technically known as synergy.

Synergy is the interaction or cooperation of two or more organizations, substances, or other agents to produce a combined effect greater than the sum of their separate effects.

The example above is but one illustration of marijuana’s synergistic effects in action.

Isolate one component—like humulene —or push one component too high—like THC—at the expense of the other components, and the beneficial effects quickly decrease.

Will Humulene Get You High? 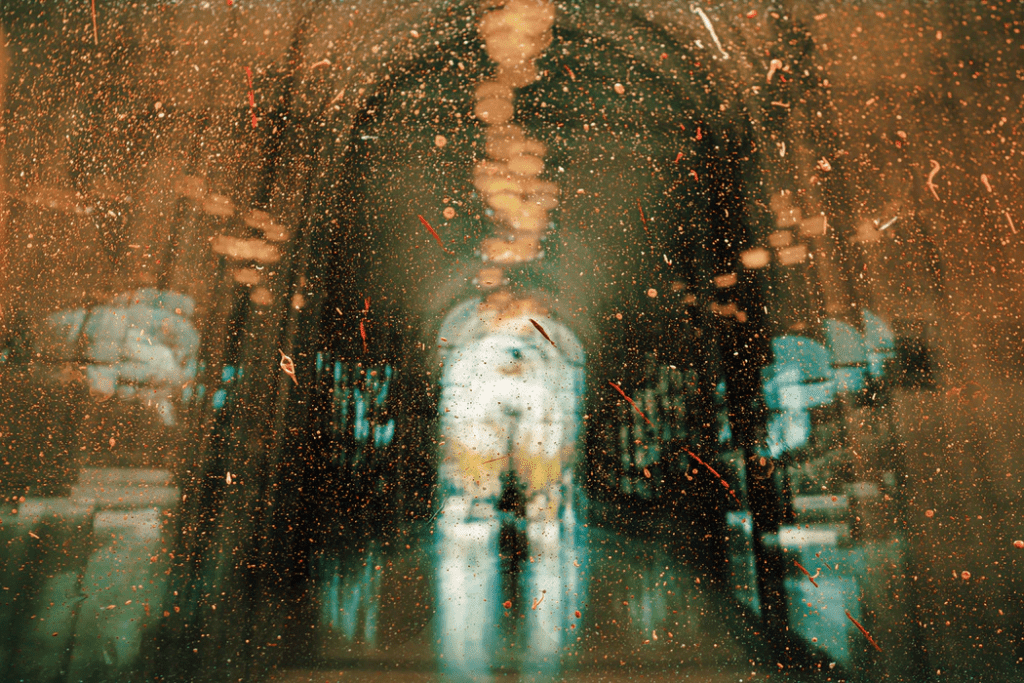 No, humulene by itself will not get you high. The only way to experience the psychoactive effects associated with marijuana is to consume THC.

Thing is, unless you purchase a humulene extract or a high-CBD/low-THC strain, there’s no way to take one without the other.

So don’t conclude that just because your pot contains humulene that you’re going to start hearing colors and get the munchies later on.

Humulene is not the cause of your high — be it a contact high or direct ingestion — THC, and only THC, is responsible.

Even though many strains contain humulene, other terpenes are present in higher quantities. As a result, our hero humulene is often less prominent (as flavor profiles go) and takes a backseat to the likes of limonene, pinene, and others.

Still, there are a number of strains in which humulene is in the front seat (even the driver’s seat), including:

If you want to experience humulene in all its glory, try rolling a joint, packing a bowl, or making hash with one of these tasty strains.

Get The Most Humulene From High-Quality Cannabis

The best way to maximize your humulene is to always buy the highest quality organic cannabis you can get your hands on.

If you’re buying dried and cured raw bud, do your research and choose strains from a reputable grower who uses the best organic methods available.

If you’re buying cannabis products — such as wax, shatter, pills, cream, or gummies — check the label or ask the budtenders if they can tell you about how the strains were grown.

Choosing organically grown marijuana that doesn’t rely on harmful fertilizers, heavy metals, or pesticides is a good idea however you consume your pot — whether that’s smoking, eating, or dripping it under your tongue.

That’s a win for all involved!