Anything with “kandy” in its name has to be good, right? Right! The Kandy Kush strain is no exception. This sweet-flavored hybrid produces a distinct lemon scent—very “Kushy”, as one user put it—when smoked and, since first being produced, has become a popular medicinal strain because of its potent high and strong pain-relief quality.

But the sweetness isn’t only restricted to its name or its smoke—sometimes the bud even looks like candy. The oranges, greens, browns, and purples combine to give this strain a decidedly rock-candy-like appearance. Just imagine this bud on a stick, ready to be licked, and you’ll know what I’m talking about.

Kandy Kush has a lot to offer (and a lot to be desired), so let’s spend a bit of time getting to know the sweetest of the sweet. 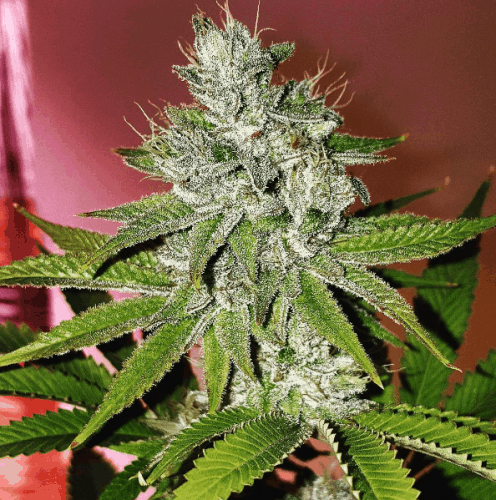 History Of The Strain

Kandy Kush is a hybrid strain originally produced by DNA Genetics and created by crossing two indica and sativa powerhouses:  OG Kush and Trainwreck. It’s original, and most common, form is predominantly indica-dominant (about 60%) thanks to its OG Kush parent. Other forms that pop up now and again, hold more of a likeness for the Trainwreck side of the family and display decidedly sativa structure and characteristics. That said, the indica-dominant strain of Kandy Kush is by far the most common and is what people are jonesing for when they need to satisfy their sweet tooth. Newer strains introduce even more of a candy vibe with flavors like cotton candy, rock candy, caramel candy. 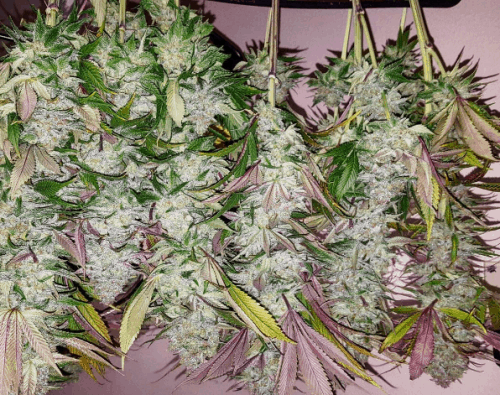 Biology Of The Kandy Kush Strain

As touched on, Kandy Kush leans towards the indica side of the scale and results in a 60% / 40% indica / sativa mix. The plant itself flowers in nine to ten weeks, is conducive to indoor growing, and can yield up to 500 grams per square meter.

THC content is slightly above average at 14.5% (indicas usually average 12.5% THC) but have been known to reach 20% or more with the right cultivation.

The taste of Kandy Kush has been described as a combination of sweet, earthy, and pungent aromas which makes for a particularly interesting smoke. It’s also characterized by its lemony smell and traces of lemon flavor that can be picked up while smoking. Some even describe it as having a spicy, pepper-like taste with a sweet, candy-like smell. Sounds great! 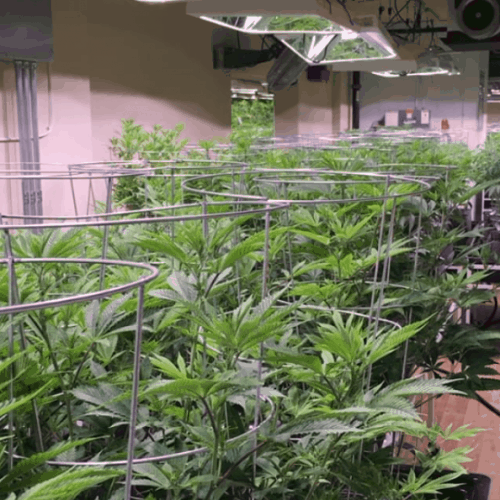 The general effects of the Kandy Kush strain lean heavily towards the euphoria side of the spectrum and are characterized by a powerful happy and relaxed feeling. This euphoria is often described as a “hybrid-type high” that results in a vibe that is chill but still cheery and actively engaged. Indica-heavy strains like Kandy Kush have been known to produce very powerful body highs that can cause extreme couch-lock. Be prepared.

Kandy Kush goes to work almost immediately producing dopamine that results in intense cerebral effects followed by a heavy, time-stopping body high. Because of this, and the fact that highs can last from 2 to 2.5 hours, Kandy Kush is recommended as an evening strain for most users.

The nice thing about the Kandy Kush strain is that its side-effects are almost non-existent (as marijuana goes) and the side-effects that it does have can be dealt with fairly easily. Anxiousness, headaches, and dizziness are on the extreme low end of the scale so you don’t have to worry about that backlash. What you do have to worry about (or at least deal with) is dry eyes and dry mouth. Kandy Kush can cause a middle-of-the-road dry-eyes effect but dry mouth is what you really have to look out for. 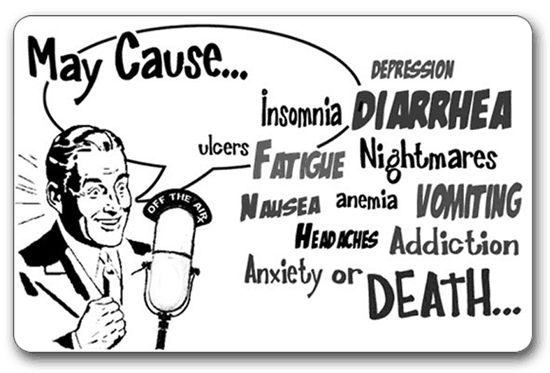 As with other strains that exhibit these drying side-effects, a couple drops of saline solution and a water bottle will have those licked in no time. Just be glad you don’t have to worry about anxiousness, headache, and dizziness.That said, Kandy Kush does exhibit a pretty intense sleep-inducing effect so you might want to think about staying at home (or at least near a couch) with this strain. While not a side-effect, per se, drowsiness certainly isn’t conducive to outdoor activities (unless it’s sleeping on the lawn). So order a pizza, find your spot on the sofa, fire up a fatty of Kandy Kush, and spend some quality time inside.

That said, Kandy Kush strain does exhibit a pretty intense sleep-inducing effect so you might want to think about staying at home (or at least near a couch) with this strain. While not a side-effect, per se, drowsiness certainly isn’t conducive to outdoor activities (unless it’s sleeping on the lawn). So order a pizza, find your spot on the sofa, fire up a fatty of Kandy Kush, and spend some quality time inside.

Kandy Kush’s euphoric effects and easy smoke make it a great remedy for a variety of ailments including insomnia, chronic aches and pains, migraines, and even anxiety and mood disorders. It’s even recommended by some doctors for complications due to bipolar disorder and sleep apnea. Like most marijuana strains, it’s better at some things than at others, but for a good general high that does what it’s supposed to, Kandy Kush can’t be beat.

Kany Kush could be thought of as the king of the stress-relievers…or at least one of them. Though its THC content isn’t remarkably high when compared to some strains, Kandy Kush’s calming effects make this a go-to choice for battling chronic anxiety and the stresses of the day.

One user described the high as a “super gelling vibe full of love and genuine compassion towards everything.” Another user said she felt like she was getting a perpetual shoulder massage after she partook of the Kandy Kush strain (maybe she was). Yes, smoking your cares away has never been easier with this delicious strain.

Kandy Kush is also an effective pain reliever so it’s great for those suffering from chronic pain due to injury or internal ailments that refuse to make themselves scarce. Even “normal” discomfort like period pains can be alleviated by the gentle numbing that Kandy Kush has to offer.

And sometimes, conventional pain medications aren’t enough. Sometimes, marijuana is the only thing that’s going to cut it. Forget the aspirin. Forget the Oxy. Wrap yourself in this pain-relieving haze instead and you’ll feel like your body and mind are brand new again.

The Kandy Krush strain and its euphoria-inducing highs work well for battling depression and the oft-associated anxiety. Smoke a spliff of Kandy Kush and set your mind at ease. Forget the pills and face the day, secure in all your needs.

Remember that marijuana in general, and Kandy Kush in particular, can be a useful tool in the fight against neglected ailments like depression and anxiety. Often times, depression, though considered a mental disorder, can have a profound effect on the physical body as well. So while Kandy Kush might not directly alleviate the physical manifestations of this disease, it can help mitigate them by getting rid of the causes…at least for a time.

Though Kandy Kush might not stimulate your appetite as intensely as some other strains, it still does a pretty good job. It won’t have you eating the couch cushions but it will make that pizza run or wing outing seem like more of an imperative. Your mom might tell you that candy will spoil your appetite—and she’d be right—but when it’s spelled with a “k”, that’s certainly not the case.

One user claims that he can eat three full meals after toking on a blunt of Kandy Kush…and still be hungry. Now those are some mighty big hunger pangs. 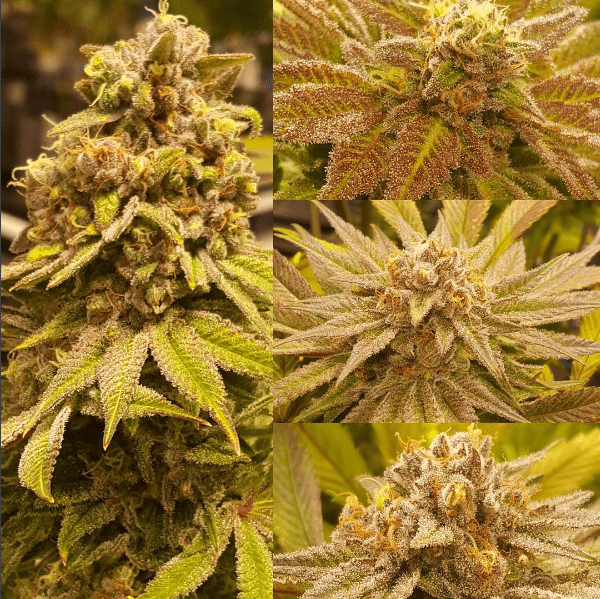 There are few things as wonderful as a good night’s sleep so the insomnia-fighting effects of Kandy Kush are highly prized amongst those who have a hard time catching some Zs. That’s one of the reasons that it’s suggested as an evening-use strain. For first-time users, you don’t want to be caught napping on the sidewalk because you couldn’t help but fall asleep. For more experienced users, Kandy Kush can bring on a dreamy-and-sleepy-while-still-awake state that is surely not to be missed.

Kandy Kush is beneficial for both recreational and medicinal use and can be used for any number of intents and purposes. If you haven’t tried this tasty strain, why not give it a whirl. What’s the worst that can happen? You’ll feel awesome (physically and mentally), have a good meal, get a great night’s sleep, and maybe have some dry eyes and a dry mouth? I’ll take that experience any day.

Now you truly can have Kandy (Kush) anytime. Let us know what you think.