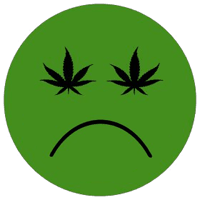 Anxiety disorders are estimated to affect 18% of our population and cost over $42 billion a year in an attempt to alleviate symptoms and suffering. Many patients who are afflicted by anxiety prefer cannabis to prescription medications because it is an organically grown, fast acting medicine without the unwanted side effects of many prescription medications.

Cannabis is so effective at alleviating anxiety that it is hardly surprising that 44% of Americans aged 12 and older have reported having tried marijuana. Yet the American Medical Association has long denied any evidence of the medicinal value of cannabis, in spite of its popular widespread use, and for decades advocated a controversial legal synthetic THC pill which has lots of unwanted side effects, including anxiety itself! The AMA has only recently urged the DEA to end its criminalization of cannabis by reviewing its status as a class 1 controlled substance. 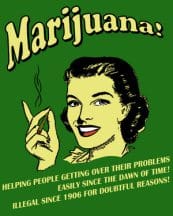 Cannabis however has been used by physicians from India, Asia, the Middle East and Africa for pain relief, depression, stress and even childbirth for more than 400 years. Cannabis was used in the United States as early as the 18th century for nausea caused by rabies, cholera, tetanus as well as skin and venereal disease before cannabis prohibition began in the 1930s.

Cannabis first began making a serious medical comeback in The United States in 2009 when The Stanley Brothers of Colorado began growing new CBD rich strains of Cannabis which saved countless lives of children beginning with Charlotte Figi who was miraculously cured of over 300 seizures by using marijuana. But what about all the reports about paranoia, memory loss and even schizophrenia associated with cannabis use since the 1936 film Reefer Madness established these stereotypes in our national consciousness? 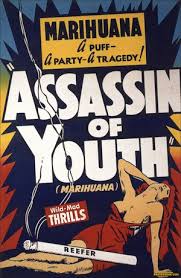 Marijuana and anxiety have a somewhat complicated chemical relationship. This post will help you understand how your body’s system of natural marijuana receptors, your endocannabinoid system, regulates anxiety. This post will also explain how the two primary psychoactive ingredients in cannabis, THC and CBD, each affect anxiety through your endocannabinoid system. We’ll also suggest some specific tried and true strains for some of the most common forms of anxiety! 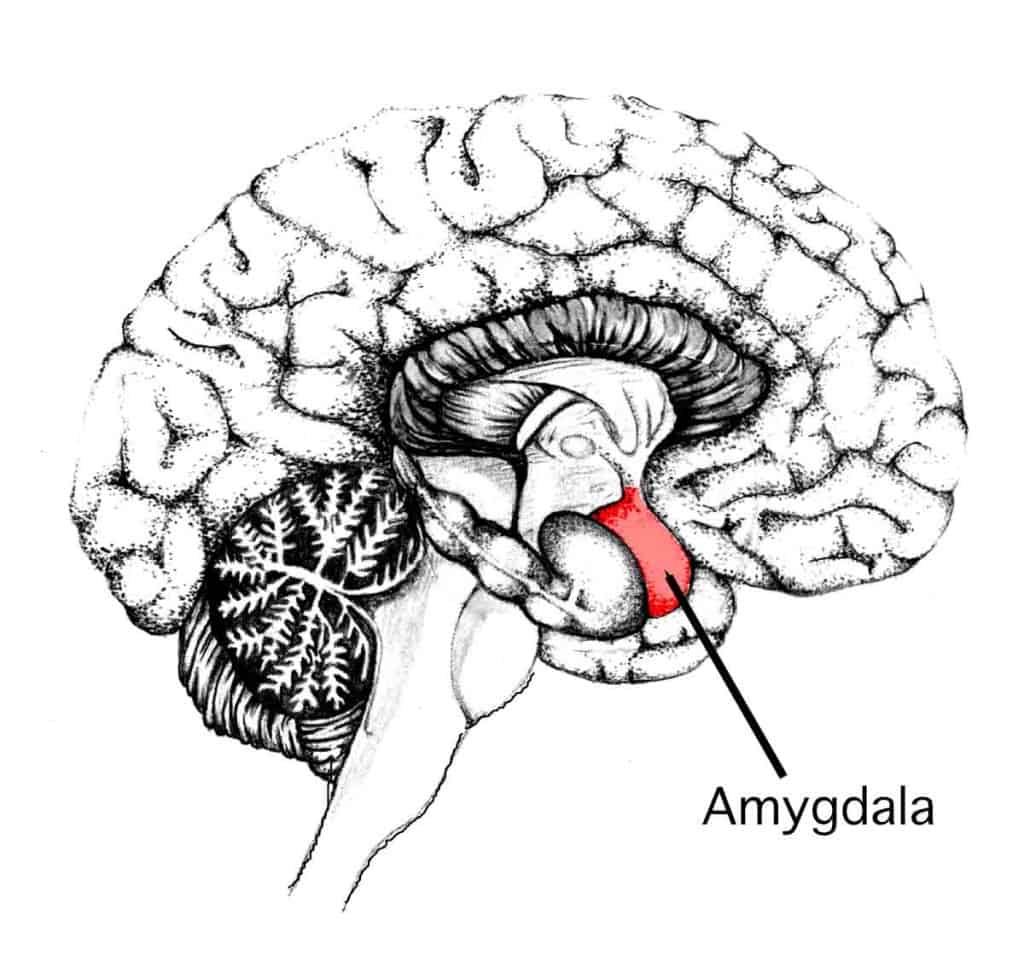 This helps us understand how stimulating the amygdala with certain strains of cannabis can either work really well or really poorly in terms of alleviating specific anxieties for different kinds of people. THC, to make a long story short, is great for stimulating euphoria and pleasure in the amygdala of nauseated cancer and AIDs patients, however THC is not the appropriate cannabinoid medication for anxiety.

The goal of ganja therapy is to get the right kind of cannabinoids for each individual patient’s specific symptoms and desired state of well-being. 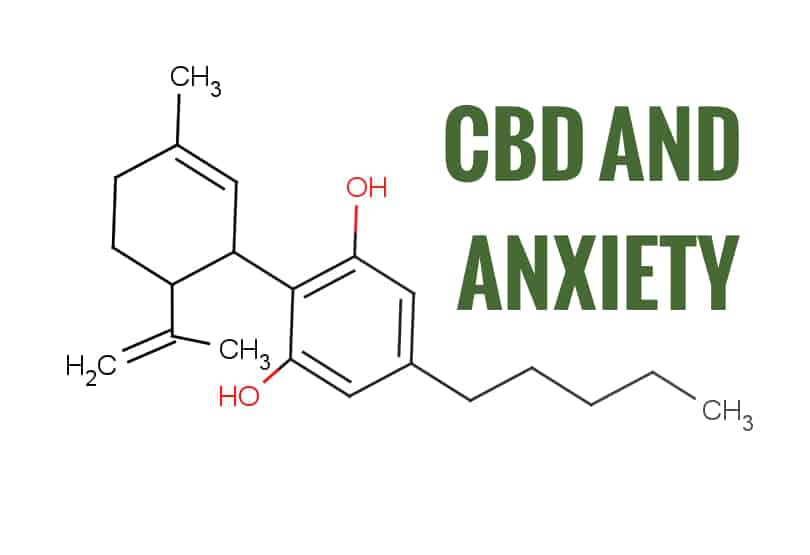 Most cannabis was bred to have high THC content until the Stanley Brothers started growing high CBD rich strains in 2009 because the euphoric effects of THC sold better on the recreational black market and because THC is effective for treating the pain of more imminently life threatening health disorders such as cancer or AIDs. CBD or cannabidiol is non-psychoactive, meaning it doesn’t get you “high”. CBD helps moderate the anxious paranoid effects of cannabis for new users with low THC tolerances which helps us understand why CBD is ideal for reducing and eliminating various forms of anxiety.

A key study demonstrates how CBD treatments reduced anxiety and helped people think more clearly while speaking to other people. 2015 420 Games winner Chris Barnicle said he used a CBD rich strain named Harlequin for his race anxiety and that the powers of CBD for performance anxiety have yet to be unlocked. 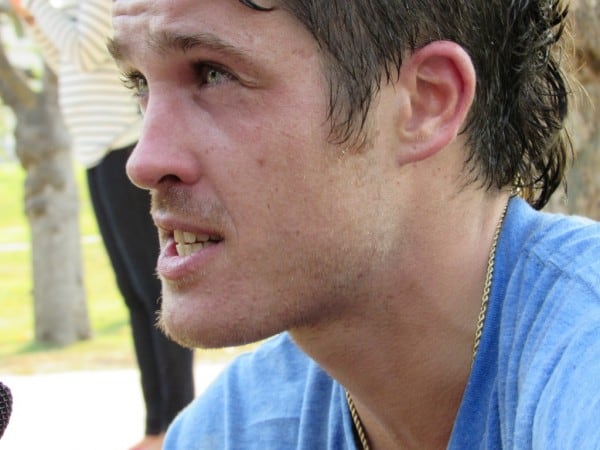 The Chemical Makeup Of Your Inner Bliss System 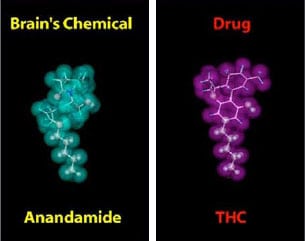 Our bodies naturally produce their own version of THC called anandamide which is derived from the Sanskrit word for bliss because this is what you feel when your body’s natural THC binds to your inner cannabis receptors known as the endocannabinoid system. Each and every one of us naturally produces anandamide. However, those of us who have less Fatty Acid Amide Hydrolase or FAAH have more bliss juice in their brains because FAAH deactivates anandamide much like CBD counteracts THC.

Studies have shown that mice with less FAAH had greater connectivity between their prefrontal cortex, the executive control center of the brain and the amygdala giving these mice greater emotional control and lower anxiety. So people with less FAAH are therefore arguably less likely to enjoy certain high THC strains of cannabis since they enjoy more naturally occurring euphoria from anandamide. This is why Clinical Psychology Professor and NYTimes Op-Ed Contributor Richard Friedman mistakenly argues that cannabis overpowers the brain’s endocannabinoid receptors and that we need a drug which can boost anandamide.

Professor Friedman however, did not display an adequate grasp of the science of CBD which does in fact boost natural anandamide production by suppressing the buzz-killing FAAH.

You Need CBD if You’re Still Paranoid about Weed! 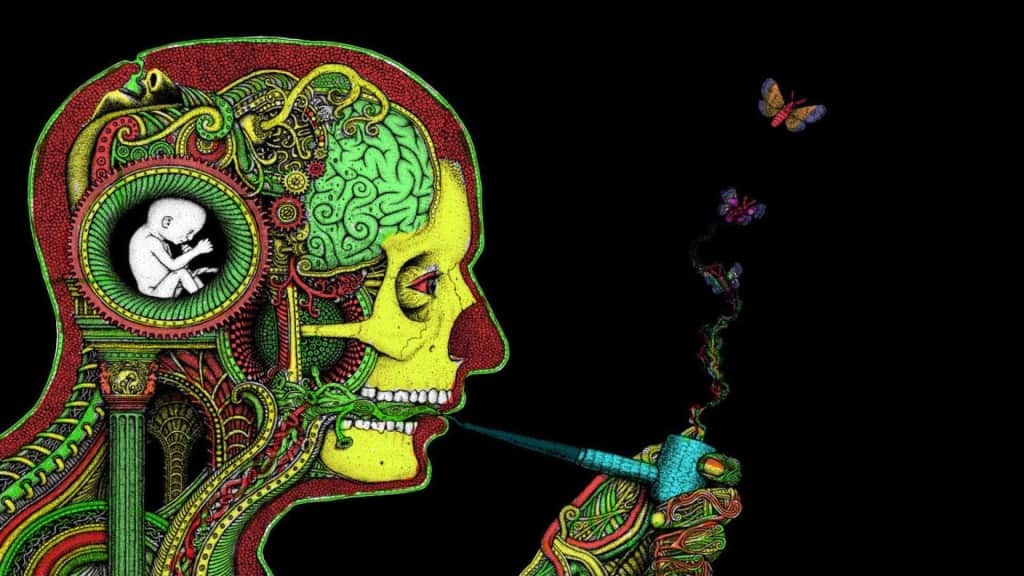 Remember how we mentioned the controversial claim that marijuana can affect memory loss? There would be no Cheech and Chong or Dude Where’s My Car genre movies without the long-troubled relationship between THC and short term memory issues. THC however does not lead to the loss of existing memories in spite of all the Reefer Madness inspired stereotypes. CBD in fact has been shown to mitigate the short-term memory loss due to THC.

Valerie Curran, a psychopharmacologist from University College London who led the latest study claimed that studying CBD could help us understand the mechanics of memory formation and how to treat disorders involving memory deficits. Research also suggests that the endocannabinoid system is correlated with extinguishing fearful and painful memories making CBD potentially ideal for treating Post Traumatic Stress Disorder. CBD-rich cannabis is also proving to be an effective treatment as an antipsychotic drug for schizophrenia in spite of the decades worth of propaganda that Harry J. Anslinger created in vain to make us think that smoking reefer leads to madness.

Far from destroying brain cells, both THC and CBD are proving to play key roles in the growth or neurogenesis of brain cells. 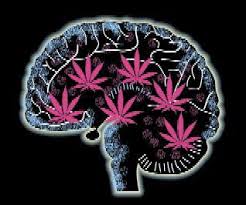 Weed Suggestions for your Specific Worries

Reefer research suggests that THC will create anxiety once a certain THC threshold is reached. Every individual has their own unique THC threshold that may be a bit tricky to predict when you are new to cannabis. This is why starting with strains that are high in CBD content is recommended if you are interested in treating anxiety disorders with cannabis.

All legal, regulated and taxed cannabis has a breakdown of the strain’s CBD and THC content. You can and should ask any “shady” illegal weed dealers for breakdowns of THC vs CBD strains because many are total ganja nerds who will know, and because many “shady dealers” still care a good deal about the health and ongoing business of their customers (in spite of the stereotypes about “shady weed dealers” on the streets).

You can also look up the name of the strain on Leafly for its cannabinoid profile if you get the strain’s name from your dealer. 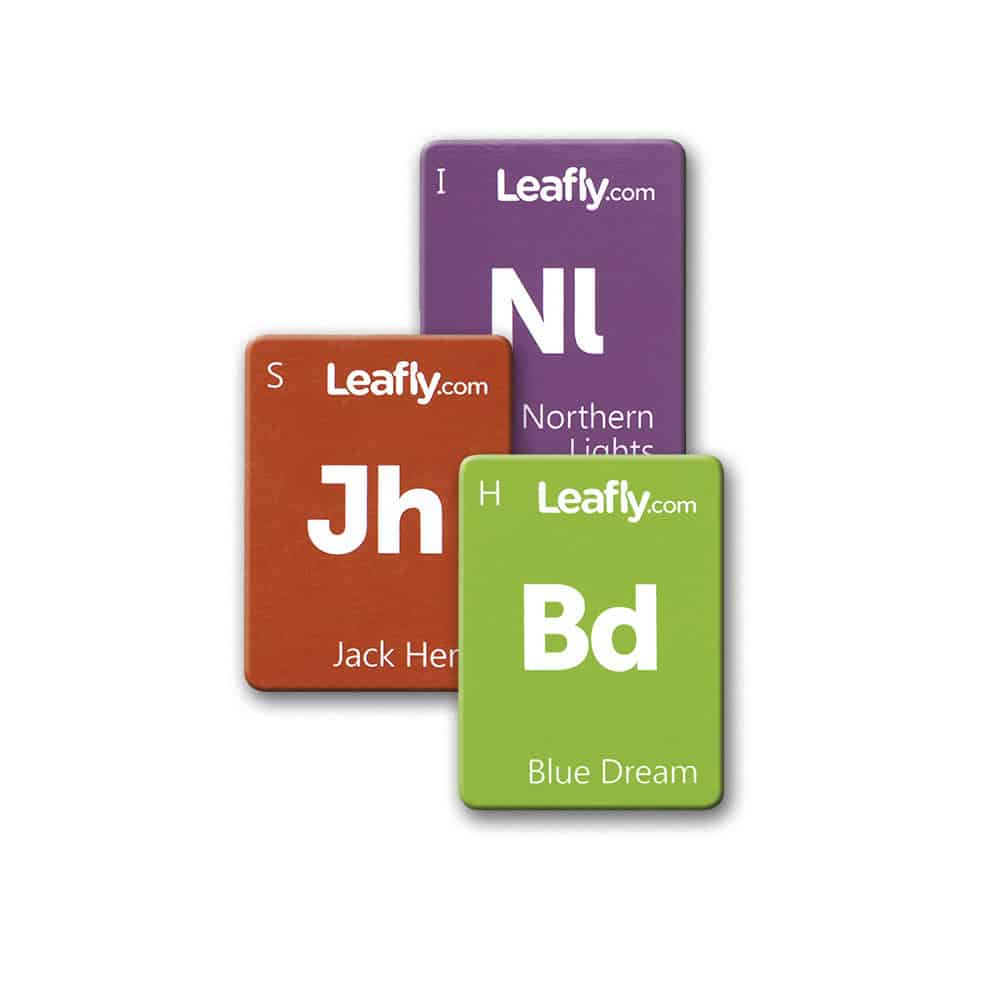 Leafly suggests indica strains such as Grand Daddy Purple, sativas such as Jack Herer, and hybrids such as CannaTsu and Cannatonic if you happen to be one the 6.8 million adults affected by General Anxiety Disorder (GAD). Girls Scout Cookies are well known for effectively treating the 7.7 million Americans with Post Traumatic Stress Disorder (PTSD). Northern Lights is noted on Leafly for treating Obsessive Compulsive Disorder (OCD) which affects 2.2 million Americans. Leafly suggests Purple Urkle and Blackberry Kush if you are one of the 60 million Americans suffering from insomnia. Strawberry Cough was suggested for the 15 million suffering Social Anxiety by a Leafy user who wrote “I usually shy away from going out in the public while smoking any bud. With this, it actually felt nice to be out while being medicated. I was able to hold constructive conversations.” 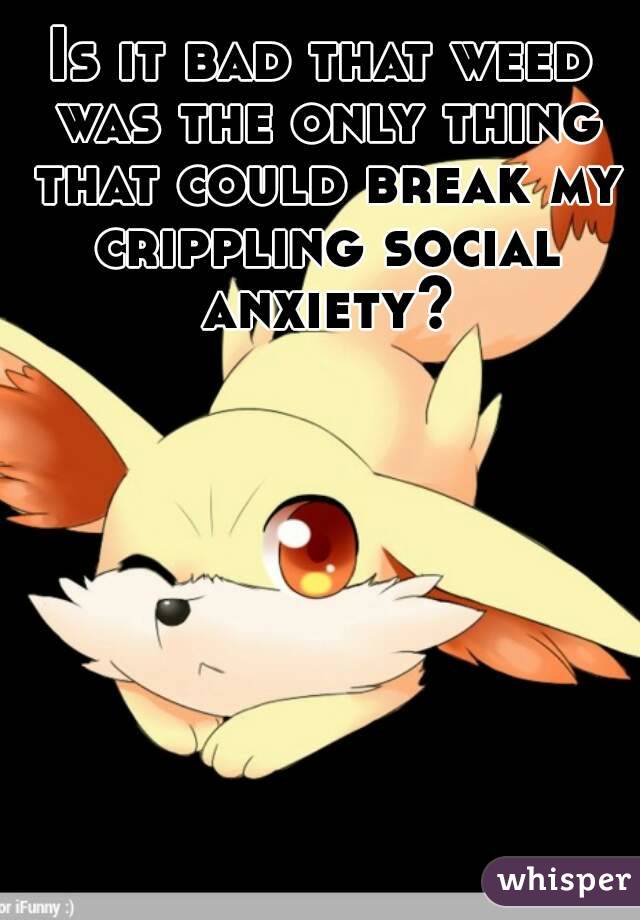 So are you feeling a bit calmer about using cannabis to curb your anxiety? Just remember, people have been using cannabis to treat anxiety for centuries before drug prohibition began in the early 1900s and that the weed we have been using since 2009 is some of the greatest ganja that has ever been grown on the earth! Our anxieties have everything to do with imbalances in our endocannabinoid systems. Our endocannabinoid systems are designed to receive anandamide which naturally produces the same inner euphoric bliss as THC which is more effective for physical rather than emotional pain. People with higher anandamide levels in their brains are less likely to enjoy THC without feeling heightened anxiety. Lower levels of anandamide in people’s endocannabinoid systems is due to higher levels of FAAH which breaks anandamide down. CBD however suppresses FAAH the same way it suppresses the anxious symptoms associated with THC, allowing you to feel higher natural levels of anandamide which is why you want to smoke, vape, dab or ingest organic CBD rich strains if you want to weed out your anxious worries with ganja therapy!