Star Wars enthusiast or simply a fan of the good ole green, you’re guaranteed a sedated trip through space with this indica dominant hybrid. As with other members of the indica family, Yoda OG is best known for its soothing cerebral qualities, making it a real hit with medical marijuana users. But the rest of the cannabis community need not feel left out, the low humming buzz of this drowsy dope makes it a popular pre-bed treat for any pot smoker. Light one up and let yourself be lulled into a dream state of lightsaber battles and little wise green guys. 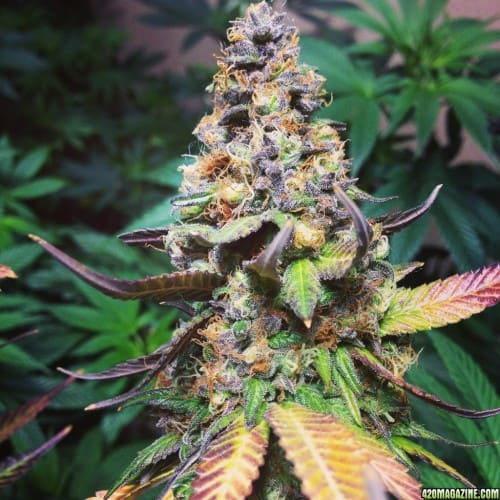 Yoda OG is one dank bud. This voluptuous little beauty has a thick head of orange hairs sprouting from light green nugs nestled between pastel sugar leaves. Its plump pale green body is covered in a crystal frosting bejeweled with golden trichomes that glisten with the promise of good times ahead.

Its earthy aroma has a distinct citrus zing with a soft scent of vanilla and its pine-like pungency is reminiscent of forest walks and freshly chopped Christmas trees. 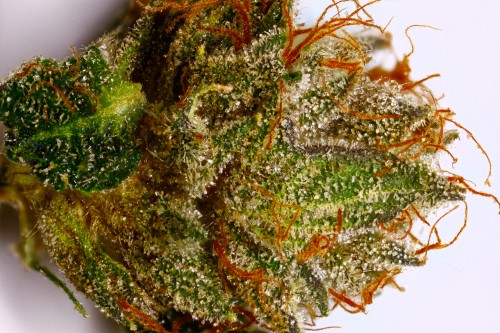 But thoughts of physical exertion or even just leaving the house will fast disappear in a puff of pungent smoke as soon as you pack your first bowl. Take a drag of this soothing strain and you’ll be settled down for some serious couch lock in no time.

Yoda OG’s high THC percentage makes this pot particularly potent. But, like a sneaky little yoda dude that’s hard to spot, it creeps up on you slowly. It may take a bit to kick in, but once it does you will experience a cerebral and body high at the same time, so get comfortable first and be prepared. I’d suggest packing yourself a bowl or bong, putting on your favorite Hollywood film, and then zoning out to some chilled out TV time as you wait for the mind and body high to build.

Typical of hybrid strains, Yoda OG influences both the body and mind simultaneously, making for a full on, head to toe high. This dominantly indica offspring has a soothing effect on the senses that mellows the mind and calms the body to a state of ultimate chill. If you’re looking to zone the world out and become one with your Netflix treasure chest of Star Wars reruns, this is the strain to choose. On the other hand, if you’ve got important tasks to get done or dinner with your girlfriend’s parents later on, a dip into a more energizing sativa baggie would be a better alternative.

The key to optimal cannabis to occasion pairing, is knowing the difference between the indica and sativa families. Indica strains tend to induce a more sleep-like state, while sativa varieties will have you energized and ready for action.

At 80% indica, 20% sativa, Yoda OG is the ideal bedtime bud. It will conquer insomnia like Luke Skywalker combating Darth Vader – with the full power of The Force behind him. You might need to move that mandatory midnight snack a little earlier on in the evening though – smoking this strain is guaranteed to bring on a mega case of the munchies. 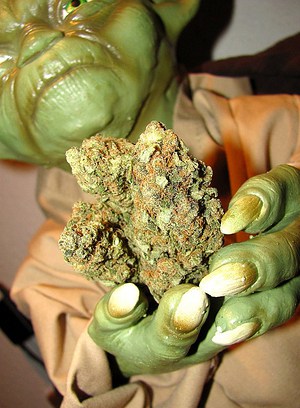 Avoid crackers or salty popcorn when creating your munchie mix as Yoda OG can create a severe case of cotton mouth if smoked in heavy doses. If you take one too many hits, your eyes may also get a bit dry to match. Other than that though, Yoda OG is a smooth sail straight through to a blissful sleep.

For first time smokers of this Star Wars themed strain, be careful not to pack too much into your bowl. If you overindulge (hard as it is not to) you could find yourself knocked out with your drool and pillow becoming one with each other before you’ve even had time to find the remote. 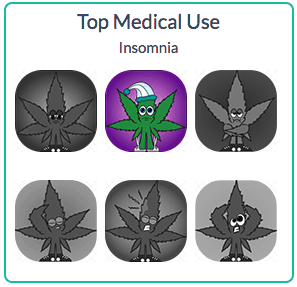 At the opposite end of self-medicating spectrum to the wake and bake strains, this indica member is best used after the sun has set. A single spliff can turn your sleepless nights into a sonorous symphony as you say goodbye to insomnia.

Inducing heavy relaxation of both body and mind with each deeply satisfying puff, Yoda OG is a popular choice to treat a variety of ailments. Its sedating euphoric effects make it the medical marijuana of choice for debilitating symptoms such as: anxiety, stress, migraines or chronic pain due to injury or illness. This pot is the perfect puff for those with anxiety, depression, PTSD, ADD, ADHD, Tourettes or Bipolar Disorder.

Whether it’s medication or pure recreation you’re after, this little green guy will make your ideal cannabis companion.

What’s With The Name Yoda OG? 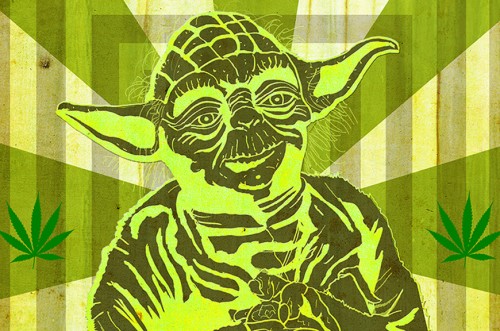 If you’re wondering how this strain got its Star Wars inspired name, you’re in for a bit of a guessing game. Some say it’s because of the long tendrils of orange fur that resemble the sparse smattering of hairs on Yoda’s otherwise bald head. Less imaginative, more cynical, cannabis connoisseurs say it’s purely for marketing purposes. Light one up for yourself and see which opinion you prefer to believe.

Not as well established within the cannabis community as sought after varieties such as Sour Diesel or Blue Dream, this particular marijuana type is sometimes confused with another more prevalent strain, Master Yoda. Although similar in nature, also a smoke of preference for its sedating, sleep-inducing qualities, this is in fact an entirely different species.

Yoda OG is a potent phenotype of the popular OG Kush strain. The exact lineage of this bud isn’t clear cut but it is thought to be a pleasing combination of Chemdawg + Lemon Thai + Old World Pki Kush.

Musing over the meaning of OG? You’re not the only one. A hot debate has been circling through the community over the last couple of years regarding the actual reference of this two-letter abbreviation. Some say it stands for “original gangster”, others think it refers to “ocean grown” while a few like to believe it means “organic”. The legend of where “OG” originates remains unanswered to this day.

What we do know, is that Yoda OG shares the spotlight with many other popular Star Wars themed strains out there. Whether you’ve watched the epic sagas or are too embarrassed to admit you haven’t to your mates, smoking one of these spaced out strains is all you need to feel more at one with The Force.

Comments From The Cannabis Community

Yoda is a wise little guy. One of his most quoted lines goes “do or don’t, there is no try.” In saying this, Yoda was trying to prep Luke Skywalker to commit fully to the pursuit of his goals or else there was no point even considering them. It was not enough for him to merely try. Now if Yoda had been referring to smoking a Yoda OG spliff, I think he would have been a little bit more encouraging of young Luke. “You never know until you try,” may have been better advice in such a situation.

There are plenty of pot enthusiasts out there who take this saying to heart and are willing to give any strain a try. This is what some seasoned smokers have to say about Yoda OG:

“Booooom shakalaka! Hits heavy like Babe Ruth in his prime using an aluminum bat and drinkin’ some of that A-Rod juice. Couch lock inevitable, but not necessarily snoozy. Let mellow marshmallows surround your buttery thoughts. Try Yoda you should.” – droopydrawers on Leafly.

“Super strong indica. If you’re looking for heavy medication this is it. I loved the high it gave me. Not too tired but I did not feel energetic. I was embracing my couch for sure and the ambiance of the high. May the force be with you.” – yoda on Kushfly.

May The Force Be With You 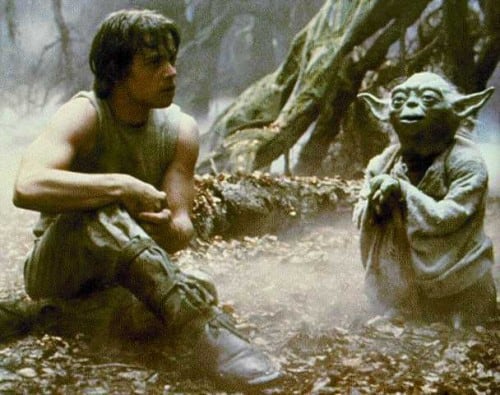 Yoda OG is one of the best-matched marijuana strains for a quality couch lock session. It’s combined mental and body indica buzz will soothe your senses as your mind unwinds and your body melts between the cushions. Any chronic pain or emotional stress will disappear in a pungent puff the moment you light up, making this the cannabis companion of choice for both recreational and medical marijuana users.

With this particular pot, the one and only aim is complete relaxation. There’s no need for physical activities or thoughts of leaving the living room. Its earthy aroma will send your mind wandering down mountain tracks laden with pine needles and soaring through hallways wafting with the sweet scent of vanilla. All without you having to get up off the couch.

Escape those tiresome social interactions, forget the requirement for coherent conversation or even the need for thoughts to make sense, and let Yoda OG lull you into a lilting dreamlike state followed by a rock solid sleep.